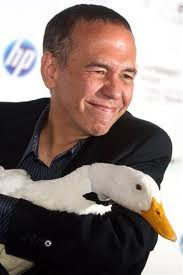 Gilbert Gottfried and his meal ticket, in happier times.
It's been quite a while since we bestowed this honor--about seven months to be exact--but this opportunity was simply too good to pass up.
We refer to the firing of "comedian" Gilbert Gottfried as the voice of the AFLAC Duck. For years, Mr. Gottfried has earned a six-figure income for very little work, screaming "A-F-L-A-C" for the company's feathered mascot at the appropriate point in each commercial. Even Gottfried expressed wonderment at his good fortune. During one interview, he wondered why insurance firm simply didn't archive his recordings, and pick out the right "AFLAC" for new spots. But the company insisted on a new recording session for each commercial, so Gottfried's little gravy train kept chugging down the track.
Until today, that is.
Apparently, AFLAC management became aware of a couple of tasteless Tweets issued by Gilbert Gottfried, in response to the Japanese earthquake and tsunami. In case you missed them, here they are, in all their tackiness:
"I just split up with my girlfriend, but as the Japanese say, They'll be another one floating by any minute now."
(and)
"The Japanese are really advanced. They don't go to the beach. The beach comes to them."
Not only does Mr. Gottfried get an "F" for attempted humor, he also fails the common sense test. During all those years of cashing checks from AFLAC and its ad agency, the "comedian" apparently never bothered to learn where insurance giant makes much of its money.
Turns out that 90% of all companies in Japan offer AFLAC as part of their employee benefits and the firm provides health or life insurance to about 25% of Japanese families. All told, the Columbus, Georgia-based company does about 75% of its business in Japan--one reason that Gottfried got the axe so quickly.
We're waiting for the Free Speech Police to jump to the comedian's defense. True, he has every right to make tasteless "jokes" about a natural disaster of Biblical proportions. But then again, his employer has every right to fire him for posting those same, humorless comments--particularly when they threaten a critical market like Japan.
As for Gilbert Gottfried, the one-time cast member of "Saturday Night Live" (he was fired from that show as well) is a worthy recipient of "Idiot of the Week." Not only did he lose one of the sweetest voice-over gigs in the business, Gottfried made himself unemployable for years to come. Can you imagine the reaction from various Asian-American activist groups the next time Gottfried's up for a major TV or movie role?
Indeed, some find it surprising that Gottfried has lasted this long, given his humor preferences. At a Friar's Club Roast in 2001, he complained about being late for the festivities because he couldn't find a plane with a "direct connection to the Empire State Building" (a line he delivered just three weeks after 9-11). Met with a mixture of groans, boos and cries of "too soon," Gottfried segued to a rendition of "The Aristocrats," (arguably the dirtiest joke of all time) and saved his set.
Assuming Mr. Gottfried works again in the next five years, it's a sure bet he'll stick to safer targets--like Republicans.
Posted by Unknown at 7:02 PM

Not sure if he would survive attacks on Republicans either..