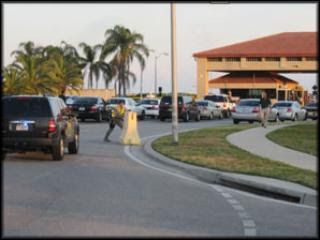 The Dale Mabry gate at MacDill AFB, Florida. The entrance was closed earlier this evening after a man attempted to crash through the gate and was shot dead by security personnel (WTSP-TV photo)

**UPDATE/9:48 pm EDT//Base officials tell the Associated Press that the incident began as an altercation at an on-base camp site. The man fled on a motorcycle and security personnel tried to stop him. The suspect evaded security forces and went to the Mabry gate, where he was engaged and shot by security personnel. Officials have not released the man's name. Use of the camping facility is normally restricted to personnel with access to the base.
***

When driving by an Air Force base or other secure, federal facility you probably saw a sign on the perimeter fence. It informs the reader that the use of deadly force is authorized in defending the installation. An Air Force Instruction (131-207) outlines criteria for using deadly force, including the inherent right to self defense; defense of others, the protection of assets vital to national security and the potential for serious offenses against persons, among others.

Those criteria were apparently satisfied outside MacDill AFB, Florida this evening. According to WTVT in Tampa (and other media outlets) a man armed with a knife tried to crash his vehicle through the base's main gate on Dale Mabry Avenue and was shot by security officers. He was pronounced dead at the scene.

Base security officials and Tampa police are investigating the incident. Vehicles entering and leaving the base are being re-routed through another gate.

There is no word on the man's identity, or his possible motive for driving through the gate.

MacDill is home to the headquarters of U.S. Central Command, U.S. Special Operations Command and an Air Force tanker wing, among other organizations.
Posted by Unknown at 8:07 PM

Notice the language "shot by security officers." It very probably was not military members, but contractor security forces. Somehow in the convolutions of our society we don't have the military members entrusted to carry firearms even when acting in the official capacity of base security. We hire out the task.