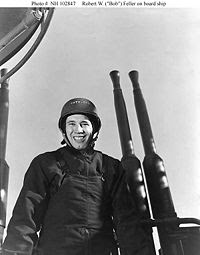 Bob Feller on the USS Alabama. The baseball star was the first major leaguer to enlist after Pearl Harbor, and spent almost five years in the Navy during World War II (Wikipedia photo.)

This past weekend marked the 70th anniversary of a remarkable athletic feat. It has only happened once in the long history of major league baseball, and fittingly, it was accomplished by one of the game's greatest players.
We refer to Bob Feller's no-hitter on April 16, 1940, the only one ever pitched on Opening Day. Like Joe DiMaggio's legendary 56-game hitting streak, Feller's no-hit performance on the first day of the season may never be duplicated. Baseball fans may argue if pitchers or batters are "ahead" at the start of the season, but this fact remains: only a handful of pitchers have carried a no-hitter into the ninth inning of opening day, and Feller is the only one who finished the task.
At the start of the 1940 season, Bob Feller was already a star player, at the ripe old age of 21. Signed off his father's Iowa farm, Feller never played a day in the minors, and became a member of the Cleveland Indians pitching staff at 17. Despite his youth, Feller's blazing fastball baffled American league hitters and he quickly became baseball's most dominant pitcher of that era. He led the league in strikeouts four years in a row (from 1938-41) and was also baseball's winningest pitcher during three of those seasons (1939, 1940 and 1941).

Oddly enough, there was concern about "Rapid Robert" as he entered the 1940 season. Despite his superb stats in 1939 (a 24-9 record and a league-leading 246 strikeouts), Feller pitched poorly during spring training, and many expected a sub-par season from the Indians star. During his last pre-season game, Feller was rocked for 15 hits and 10 runs, generating more speculation that he would struggle in 1940.

Opening Day found the Indians in Chicago, for series with the White Sox at old Comiskey Park. The weather was raw and cold, with temperatures in the 40s. Only 14,000 fans showed up for the season opener as Feller took the mound.

And sure enough, he struggled in the early innings. As Mr. Feller recently described his performance for MLB.com:

The White Sox loaded the bases on Feller in the second inning. Center fielder Roy Weatherly dropped Taft Wright's one-out fly ball, allowing Wright to advance to second. It could have been ruled a hit, as Weatherly battled the wind on the play, but the official scorer made it a two-base error.

Then, with two out, Feller walked Mike Tresh and the opposing pitcher, Edgar Smith. But he struck out Bob Kennedy to record the third out.

"After that," Feller says, "I started pitching better."

Good thing, too, because he got little offensive support from his teammates. The Indians scored their only run in the fourth when Feller's roommate, Jeff Heath, singled and catcher Rollie Hemsley, drove him home with a triple.

Feller faced his final challenge--predictably--in the bottom of the ninth:

The first two batters in the bottom of the ninth went down quickly. But Feller found the last out of the game more difficult to come by. Shortstop Luke Appling, who always gave Feller fits, worked the count to 2-2. One strike away from the no-no, Feller saw his next four pitches fouled off by the pesky Appling, who was in the prime of his Hall of Fame career. Rather than tempt fate, Feller threw the next two pitches outside to walk Appling.

"I walked him on purpose," Feller says, "but nobody knew it but me."

Up came Wright, and he hit a sharp grounder to the right side of the infield, to the left of second baseman Ray Mack.

"Mack dove for the ball, knocked it down, picked it up barehanded and threw him out at first base," Feller says. "That was the ballgame."

While the Opening Day no-hitter remains a singular achievement, Feller doesn't rank that performance as high as his later no-hitters (against the Yankees in 1946 and against Detroit in 1951), or some of his one-hitters (he pitched 12 over the course of his career, a major league record).

Feller went on to a great season in 1940; he won a career-high 27 games, led the league with a 2.61 ERA and posted 261 strikeouts, while pitching 320 1/3 innings. The team, however, fell short of its goals, losing the pennant to the Tigers by a single game.

Like many players of his era, Bob Feller's career was interrupted by military service during World War II. After the attack on Pearl Harbor in December 1941, Feller was the first major leaguer to enlist, joining the Navy on December 8th. The Indians ace asked for a combat assignment and got his wish, serving as a gun captain for an anti-aircraft battery on the battleship USS Alabama. Feller and his ship mates earned nine battle stars during the war.

By the time his big league career ended in 1956, Bob Feller had won 266 games for the Indians, striking out over 2,500 batters. He still holds the club record for victories by a pitcher, 54 years after his retirement.

Mr. Feller always speaks proudly of his Navy service during the war, never expressing regret about those lost seasons, which occurred at the peak of his career.

So how did the wartime interruption impact Bob Feller's baseball totals? With four more seasons in the big leagues, many baseball historians believe that Feller would have won an additional 90-100 games and struck out at least 700 more batters. That would have pushed his career victory total to 370, putting Feller at #3 or #4 on the all-time list. With another 700 strike outs, Feller would be just outside baseball's Top 10 in that category.

Bob Feller is more than a great pitcher. He is also a great patriot, a man who put aside athletic stardom--and its financial rewards--to serve his country in a time of war. Feller remains the only Navy Chief Petty Officer ever voted into a sports hall of fame and if you visit the USS Alabama (now a museum ship in Mobile), his bunk is clearly marked.

ADDENDUM: Discussions about Feller and his fastball invite inevitable comparisons with other power pitchers, including Nolan Ryan. Many batters who faced both Feller and Ryan claim the Indians' ace had greater velocity on his fastball. That decidedly unscientific comparison is still remarkable, since those hitters faced Bob Feller at the end of his career, while Ryan was in the early stages of his.

Posted by George Smiley at 5:23 PM

Ted Williams is another great player who sacrificed his prime playing years to serve, both in WW II and Korea.