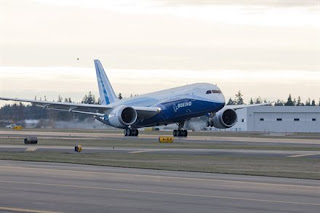 The first Boeing 787 Dreamliner during a high-speed taxi test last week. The Dreamliner made its maiden flight this morning (Boeing photograph via Aviation Week)

The future of commercial avaiation took the skies over Washington state today.
Boeing's next-generation jetliner, the 787 "Dreamliner," made its four-hour maiden flight this morning, the first step in the aircraft's flight test program and eventual certification as a commercial jet.
According to company officials, the first flight went smoothly and ended an hour earlier than planned, due to deteriorating weather conditions in the Seattle area. While airborne, Boeing test pilots Michael Carriker and Randall Neville performed a series of basic flight maneuvers and systems checks, to "make sure the plane flies the way its supposed to fly," in the words of spokesman Jim Proulx.
Today's flight came more than five years after the 787 was first announced, and two years past the original start date for aerial testing. The Dreamliner program has been plagued by a series of development and production problems, ranging from ill-fitting parts to the challenge of integrating new processes into the manufacturing process.
Built largely from composite materials, utilizing advanced engines and equipped with a "distributed" electric system, the 787 is designed to operate 20% more efficiently than existing long-haul jets, including those from Boeing's arch-rival, Airbus.
Those potential costs savings have made the Dreamliner a hit with airlines worried about rising fuel prices. Boeing's sales force has already written 910 orders for the 787--before the first aircraft has been delivered. Assuming there are no other glitches in the testing and certification program, Japan's All Nippon Airlines will receive the first production model of the 787 late next year.
But, as Aviation Week observes, Boeing now has to build the aircraft, at a rate that will satisfy customers and without safety and manufacturing problems that would trouble the FAA and other aviation regulatory agencies. Building large aircraft, writes Aviation Week, is always a challenge. But the challenge for the 787 team is made more complex by the new manufacturing technologies used to produce the Dreamliner.
Boeing actually views the 787 as the "third notch" in the long-haul market, serving 7-8,000 mile intercontinental routes. It was another Boeing product (the venerable 747) that made those routes popular and profitable, hauling an average of 400 passengers on each flight. When the airlines demanded more efficiency on long-distance flights, Boeing answered with the 777, a twin-engine wide-body jet that carries up to 365 passengers on the same route.
Now, the Dreamliner promises even greater efficiency with a smaller capacity (an average of 250 passengers). Introduction of the 787 will allow the airlines to tailor their service to market demands, operating a smaller Dreamliner--filled to capacity--instead of a half-empty 747.
Still, getting the new jet in the air has been anything but easy. Tier 2 and 3 suppliers fell behind schedule, creating work delays for companies that are building major components of the Dreamliner. Boeing also endured labor problems; machinists at its facilities in Seattle went on strike last year, after the company announced plans to open a second 787 production line in Charleston, South Carolina. Boeing also had to step up payments to suppliers who ran into financial difficulties.
However, those problems were forgotten--at least temporarily--as the 787 lifted into the skies this morning. Fact is, the Dreamliner is already changing the face of aerospace; the materials and processes used to build the jetliner will become standard practice in commercial aviation. Airbus is now scrambling to integrate composite fuselages in its commercial jets. With Boeing now offering a single-piece composite fuselage in the 787, customers are demanding them in other aircraft.
It's also worth noting that Boeing built the 787 without the massive government subsidies that fund Airbus' aircraft development efforts. The European consortium achieved their own milestone last week, with the first flight of their "mid-sized" military transport, the A400M. Larger than Lockheed's C-130 (but smaller than the Boeing C-17), the A400 will give European militaries a medium lift capability they have previously lacked.
Like the Dreamliner, the A400M is behind schedule. Development of the military transport began about 20 years ago, and the program was well underway when Boeing conceived the 787. There's something to be said for a company that can move a program from launch to the first flying model in only five years. Boeing isn't perfect, but the 787 shows the rewards for a company willing to dream big.

Posted by George Smiley at 5:34 PM

Good one on The Dream Takes Flight. It really helps!!
I came across one such legit home business opportunity in www.debtfreeliving.topratebiz.com . It seems to be a TopRate ethical home-based business that you can enjoy from the comfort of your own home.