Last Friday, we noted renewed efforts to locate the remains of Marine Corps combat photographer William Genaust. Sergeant Genaust disappeared in a cave on Iwo Jima in early March 1945, nine days after recording the famous flag-raising with his movie camera. The brief sequence--captured in less than 200 frames of film--is the same event immortalized in Joe Rosenthal's Pulitzer Prize-winning still photograph.

Searchers hope that a recent tip will lead them to the remains of Genaust and other Marines who remain missing on Iwo Jima, more than 60 years after the battle. It is believed that Genaust was abducted and killed by Japanese soliders when he went into the cave to dry off, or was hit by enemy machine gun fire while trying to illuminate a cave for his fellow Marines.

As we observed in our previous article, the legendary event photographed by Genaust and Rosenthal was actually the second flag-raising on Iwo Jima. On the morning of February 23, 1945, a Marine patrol erected the first American flag on Mount Suribachi, the highest point on the Japanese-controlled island. That moment was captured by another Marine Corps photographer, Sergeant Lou Lowery, and published in Leatherneck magazine. 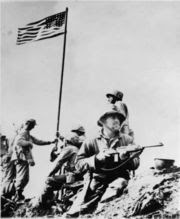 The first flag-raising on Iwo Jima, February 23, 1945. Corporal Lindberg is seen standing, at the extreme right of the photograph.

Now, the Associated Press reports that the last survivor among the first group of flag-raisers has died. Corporal Charles W. Lindberg passed away Sunday in Richfield, Minnesota, at the age of 86. As the wire service notes, Lindberg spent decades explaining that it was his platoon that hoisted the first flag on Iwo Jima, not the group captured in Rosenthal's photograph (below) and Genaust's movie footage. The second flag was erected about four hours later, after a Marine officer directed the raising of a larger one, big enough to be seen by "every son of a bitch on the island." 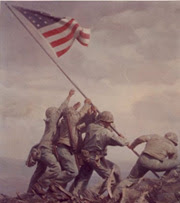 Among that latter group was a Navy corpsman, John Bradley. His son, author James Bradley, wrote the best-seller "Flags of Our Fathers," the definitive account of the men who hoisted the Stars and Stripes over Iwo Jima that day. He discovered that the first flag-raising received the most attention initially; Sergeant Ernest "Boots" Thomas, the platoon sergeant for the first group of Marines, was allowed to leave his unit for a few hours for a live interview on CBS Radio. Thomas, who won the Navy Cross on Iwo, described the earlier flag-raising for listeners. He subsequently rejoined the platoon, and died in combat a few days later.

But the second flag-raising quickly eclipsed the first with publication of Rosenthal's famous image, arguably the most-reproduced photograph in history. Mr. Rosenthal arrived late at the summit of Suribachi that afternoon, and snapped the picture without knowing what his camera had recorded. An AP editor on Guam instantly recognized the photograph as a classic, and radioed the image to New York, where the wire service relayed it to member newspapers. By some accounts, the photo was on the AP wire only 18 hours after Rosenthal shot it--astonishingly fast for that era.

Ironically, the iconic photograph caused problems for both Rosenthal and Corporal Lindberg. The AP photographer spent decades battling accusations that he had "staged" the photo. Rosenthal did, in fact, stage a picture on Suribachi that day, but it was a "gung ho" shot of Marines in the detail--taken after the flag-raising was complete.

As for Lindberg, he was sometimes called a "liar" for claiming that he had raised a flag on Iwo Jima, although the Lowery photograph proved his participation in the first event. The AP reports that he spent his later years trying to raise awareness of the first flag-raising, and he autographed copies of the Lowery photo. The Minnesota State Legislature passed a resolution in his honor in 1995 --and deservedly so. Lindberg was a hero in his own right; he received the Silver Star for his heroism as a flame-thrower operator on Iwo Jima, an especially dangerous job in a battle that killed over 6,000 Marines.

all the slog
the greater love
thankful