...Osama's rep for east Africa. You've had your triumphs in the past, but recently, you've hit a rough patch. The Ethiopian Army has invaded your safe haven in Somalia, forcing you to flee. Can't take a boat out of Mogadishu, because the U.S. Navy has blockaded the coast. Can't go north, because the Ethiopians aren't very keen on Al Qaida prisoners. So, what do you do? Head south, and hope for the best. Try to establish a new operating location among more friendly Muslims in the south. Why, here's a place we can hide. 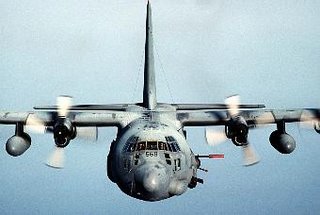 More thoughts and analysis from Austin Bay and Strategy Page.

And, at Pajamas Media, Daveed Gartenstein-Ross and Richard Minitier explain how the U.S. has been involved in the Somali operation from the start. With the aircraft carrier Eisenhower now on station, it looks like U.S. ISR support and close air support (CAS) missions will continue for a while.

One final thought: there is a Russian connection in this operation as well. Contract pilots from Russia have long formed the backbone of the Ethiopian Air Force; those MiGs that buzzed Mogadishu a couple of weeks ago, were probably flown by Russians. I've also heard that Russians fly some of Ethiopia's attack helicopters as well. Under that scenario, you could have U.S. special forces coordinating CAS missions with Ethiopian HIND or HIP attack helos, piloted by Russians ex-pats. That's a "9-Line" briefing I'd definitely like to hear.

However, the system is working, despite any language and communications problems that might exist. BTW, the Russian contingent has been in Ethiopia for years, dating back to the days when Addis Ababa was a Soviet client state. With the collapse of communism (and political changes in Ethiopia), the "official" presence eventually gave way to a smaller group of contractor personnel, hired to maintain and operate advanced weapons systems, like the SU-27 FLANKERs of the Ethiopian Air Force. Moscow doesn't talk much about its presence in Ethiopia these days, and the potential participation of contractor personnel doesn't equal Moscow's endorsement of the military operation. But you'll note that Vladimir Putin hasn't criticized the invasion of Somalia, either.
Posted by Unknown at 8:22 AM

In these trying times when every Islamic terrorist starts to look like a "nail", it's ever so gratifying to see our troops drop the right "hammer". Spooky indeed.

One final thought: there is a Russian connection in this operation as well...

Hmm. I wonder what the commentator J.R. Nyquist would think of this angle.

now they know why they call her "puff the magic dragon"....

If they DO drop another 20,000 troops into Baghdad/Anbar Province, I hope the above operation is a preview of much more to come of the same variety.

No more Political Correctness in the WoT !