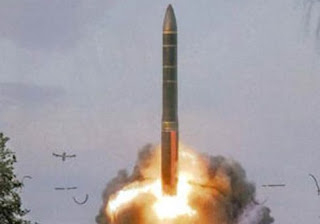 A Russian SS-27 Mod 2 ICBM during a test launch.  Variants of this missile are a cornerstone of Russian's strategic modernization efforts.

President Obama is holding his fourth--and last--nuclear security summit in Washington.  The good news is Mr. Obama won't be around to hold a fifth exercise in futility; the bad news: we'll have to endure a weekend of fawning news coverage which ignores the most salient fact: the danger posed by nuclear weapons has actually grown on this President's watch.

Evidence of that grim reality can be found around the globe.  We'll start with Russia and Vladimir Putin, who took a pass on the latest Obama confab.  And why not?  As Bill Gertz reports in the Washington Free Beacon, Moscow is busily expanding its nuclear arsenal, adding new missiles to the inventory with more warheads on those weapons:

Russia is doubling the number of its strategic nuclear warheads on new missiles by deploying multiple reentry vehicles that have put Moscow over the limit set by the New START arms treaty, according to Pentagon officials.

A recent intelligence assessment of the Russian strategic warhead buildup shows that the increase is the result of the addition of multiple, independently targetable reentry vehicles, or MIRVs, on recently deployed road-mobile SS-27 and submarine-launched SS-N-32 missiles, said officials familiar with reports of the buildup.

“The Russians are doubling their warhead output,” said one official. “They will be exceeding the New START [arms treaty] levels because of MIRVing these new systems.”

The 2010 treaty requires the United States and Russia to reduce deployed warheads to 1,550 warheads by February 2018.

The United States has cut its warhead stockpiles significantly in recent years. Moscow, however, has increased its numbers of deployed warheads and new weapons.


The State Department revealed in January that Russia currently has exceeded the New START warhead limit by 98 warheads, deploying a total number of 1,648 warheads. The U.S. level currently is below the treaty level at 1,538 warheads.

But we shouldn't worry, according to a spokesman for the State Department's Bureau of Arms Control, Verification and Compliance.  Blake Narenda told the Free Beacon that the increase in Russia's nuclear inventory is the result of "fluctuations" that come with force modernization.  He also noted the New START treaty does not contain interim limits, and the U.S. still expects Russia to be in compliance by the 2018 deadline.

And there may be more "fluctuations" to come.  Moscow is busily deploying more of its modern SS-27 Mod 3 mobile ICBM and its sub-launched equivalent, the SS-N-32.  Russian press reports indicate that each will be armed with up to 10 MIRVs.  The Kremlin is also working on a new rail-based ICBM that will carry up to 12 warheads, and another land-based missile, the SS-X-30, that will be armed with 10-15 warheads.  Naturally, the new systems are much more reliable than the older missiles being replaced, and those multiple MIRVs have improved accuracy, allowing Moscow to pin-point more American targets.

Meanwhile, the U.S. is making do with 40-year-old Minuteman III ICBMs that will remain in service for at least another 15 years.  To remain within START limits, our land-based missiles are armed with only a single warhead.  The Minuteman III is also silo-based, in known locations the Russians dialed in long ago.  While Moscow has fewer deployed, land-based ICBMs (299 compared to 450 Minuteman IIIs), well over half of Russia's strategic missiles are based on mobile launchers that are extremely difficult to detect and track out of garrison.  Environmental "concerns" in the United States will almost certainly keep our ICBM force in silos for the foreseeable future.

But Russia's modernization program isn't the only one underway.  The Financial Times reported earlier this week that China is on the verge of deploying its newest ICBM.  The road-mobile DF-41 is the PRC's first long-range missile that is capable of striking targets throughout the United States.  Older missiles, including the DF-31, could only reach the western portions of the CONUS.

But that will soon change, given recent observations of DF-41 testing.  “Given the number of real reported tests, it is reasonable to speculate the DF-41 will be deployed to PLA Strategic Rocket Force bases in 2016,” said Richard Fisher, senior fellow at the International Assessment and Strategy Center in Washington.  And, since Beijing isn't bound by the START accord, it is free to build and deploy as many new missiles as it wants.  It's also worth noting that news about the pending deployment of the DF-41 came as China's President Xi Jinping arrived in Washington for the nuclear summit.

And not to be outdone, North Korea has moved a step closer towards deployment of an operational ICBM that can hit most of the U.S.  Earlier this week, the Pentagon confirmed that Pyongyang is working on a longer-range version of the KN-08 missile, first unveiled in 2012.  The new variant, designated the KN-14, is believed capable of delivering a nuclear warhead over 6,000 miles, giving it enough range to strike Chicago or Toronto.

Rick Fisher, a senior fellow at the International Assessment and Strategy Center who has studied the two missiles’ Chinese launchers, said Russia has estimated the KN-14 could have a range between 5,000 and 6,200 miles.

“From the far northern corner of North Korea, [6,300-mile] range is sufficient for the KN-14 potentially to reach Chicago and Toronto,” Fisher said.

“It may be a stretch to fulfill North Korea’s recent propaganda video called ‘Last Chance’ depicting a nuclear strike on Washington, D.C.”

Fisher, however, said the rapid development of the KN-14 from the KN-08 indicated Pyongyang could be capable of building even larger missile variants that would have sufficient range to strike Washington.

“It is apparent that North Korea is continually researching and upgrading its ballistic missile designs,” he said, adding that the differences are so significant that the new missile should be given a different designator from the KN-08.

As Kim Jong-un's ICBM program gathers speed, it's a safe bet that efforts to develop a smaller nuclear warhead are continuing apace.  Admiral William Gortney, the outgoing Commander of U.S. Northern Command, told Congress that he believes North Korea is already capable of hitting the United States with a nuclear-capable missile.  And he's not alone in that assessment.

Obviously, any capabilities the DPRK has in that area are now rudimentary, at best.  But even if Pyongyang has the limited ability to strike the U.S. with nukes, that can change the strategic calculus between Washington and the DPRK.  Having seen Iran's big payoff from its nuclear deal with the United States, Kim Jong-un would like to fashion a similar accord--and he believes rattling the ICBM sabre may the first step in the process.

But the list of current and emerging nuclear threats doesn't end there.  A few days ago, CNN reported that American officials are increasingly concerned about ISIS's nuclear ambitions:

Raiding the home of a suspected planner of last November’s Paris attacks, Belgian authorities found surveillance video of a top Belgian nuclear scientist. That suspect, part of the same ISIS cell accused of last week’s attacks in Belgium. The shocking discovery turned the heads of counter-terrorism experts who fear that Belgium, with several previous nuclear breaches, could be at risk for terrorists to obtain radiological materials for a so-called dirty bomb.

There is also possibility that ISIS might obtain a working nuclear device from a country like Pakistan or even North Korea.  Nuclear terrorism is expected to be a prime topic at Mr. Obama's summit in Washington.

To be fair, the issue of nuclear proliferation is both complex and multi-faceted.  A threat once defined by Russia's strategic forces now includes everything from Moscow's on-going build-up to terrorists detonating a dirty bomb in an American city.  There isn't a single, magic bullet solution.

But it is also fair to ask a rather pointed question: how much has been achieved through this series of Obama-hosted summits?  A few countries have agreed to reduce their stockpiles of highly-enriched uranium, but tons of nuclear material remain in more than half a dozen nations.

But there are also those modernization efforts, underway among many of our potential adversaries. Policy wonks would argue that such concerns fall under the heading of arms control (and dealt with accordingly), but that misses an important point.  Those new missiles in Russia, China, North Korea and (eventually) Iran are aimed--or will be aimed--at the U.S, and tipped with nuclear warheads.  Years of summitry has done nothing to mitigate those threats, yet administration officials say they're ready for a new START with Russia, and they would be willing to sit down with other nations as well.

Missing from all of this is the best bargaining chip: a strong American nuclear deterrent.  The administration likes to point out that the U.S. has more ICBMs, missile subs and strategic bombers than our enemies, while ignoring the fact that our strategic forces are getting long in the tooth.  Over the next 15 years, Pentagon, the Congress and subsequent administrations must come up with enough money for a new long-range bomber; a replacement of the Ohio-class SSBN fleet and a new ICBM, along with improved warheads and the infrastructure to support them.

That's a very tall order, but an investment worth making.  The current wave of modernization and proliferation efforts stem (in part) from perceptions of American weakness on the global stage, and Mr. Obama's unwillingness to confront changing threats.  Strengthening our nuclear deterrent will certainly improve our security and our future bargaining position, even at a steep fiscal cost.  It's a much better choice than the current option, based on the pillars of weakening our military and entering dangerous agreements with our adversaries.  Abandoning that fantasy land should be the first step for our next commander-in-chief, but there are grave doubts if any of them are up to the job.

The ever-expanding welfare state is forcing absolute reductions in expenditures in all other categories, including especially defense. We now have a carrier essentially removed from service because we cannot afford to refuel it. Deep reductions in our conventional forces are on the table, exacerbated by boondoggles like the F35. The idea that we will get 2,400 plus F35s and 100 plus B3s is absurd on its face. Expect about one-fourth to one-third of those numbers. Fourteen SSBN's are likely to become six, etc, etc, ad nauseam.

If Sanders or Clinton becomes President, the US will be reduced to a regional power like the UK or France or Russia. Japan and South Korea, and probably Germany and Italy, had better get their own nukes, because the Pax Americana and its umbrella are over.