Last summer, when some in the MSM were actually paying attention to Hillary's e-mail scandal, the former Secretary of State (and Democratic Presidential candidate) tried to assure supporters she had done nothing wrong:

"I am confident that I never sent nor received any information that was classified at the time it was sent and received," Mrs. Clinton stated.  Both she and her supporters have tried to paint the classification issue as a dispute between government agencies over the content of her e-mails.  Never mind that the Inspector General of the Intelligence Community has determined that hundreds of Clinton e-mails, sent through her private server, were "born classified," that is, the material they contained was already classified at the time the message was sent or received.

So, how will she explain this one, which surfaced in her batch of e-mails that was most recently released: 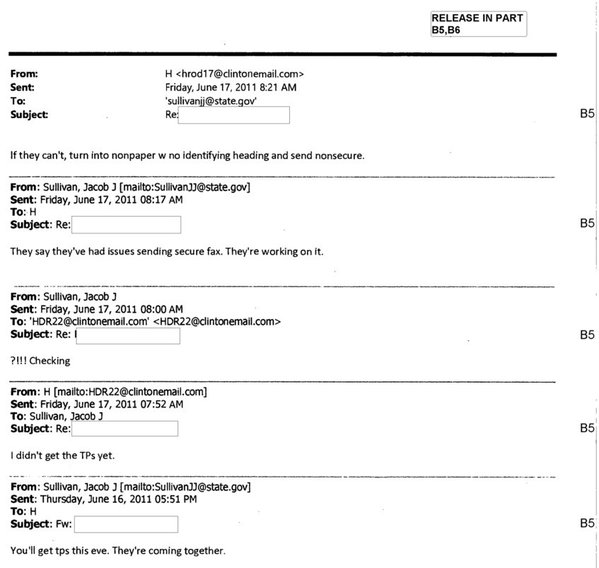 Take a look at the last e-mail in the chain, sent by the Secretary herself.  Apparently, Mrs. Clinton's aides had been having problems with their classified fax machine, preventing transmission of needed talking points.

Her response: "If they can't [send it via secure fax] turn into nonpaper w no identifying heading and send nonsecure."

The e-mail, sent to senior aide Jake Sullivan appears to be a clear directive to transmit classified material over a nonsecure fax machine.  Stripping off the "identifying heading" would remove the classification stamp that appears at the top of classified documents.

So, in the course of 13 words, we have a cabinet official, the Secretary of State, directing a member of her staff to willfully violate a number of rules/regulations/laws governing the handling and transmission of classified information.

Of course, there are a number of problems with this technique.  First, if the talking points were properly formatted, there should be a classification marking for each section, depending on the sensitivity of the material.  There should also be declassification instructions at the bottom of the page. No word on whether those markings were deleted as well.

It goes without saying that sending classified data over a nonsecure fax machine is just as bad as transmitting it through a non-secure server.  Very easy for a hostile intelligence agency to intercept.  And, we have no way of knowing how many messages, memos and other classified documents may have been sent this way.  Mrs. Clinton's "matter-of-fact" tone suggests it was an approved practice among her staff; why make that long walk to the SCIF to send a TS/SCI document when you can just strip off the classification markings and send it over an unclassified fax?

For anyone who's ever held a security clearance and handled classified material, this is jaw-dropping; it's the kind of thing that can (and should) result in a rock-breaking tour at Leavenworth.  But if you're HRC or a member of her senior staff, classification rules only exist for the "little people."  If the classified fax machine isn't working properly, they can't be expected to use another one (and there are dozens at Foggy Bottom).  No, just use the unclassified machine and let someone else worry about the consequences.

Ed Morrissey at Hot Air was among the first to notice this bombshell, and he helpfully links to 18 USC 793, which prescribes punishment of up to 10 years in prison, a fine (or both) for anyone who "causes [it] to be communicated, delivered or transmitted the same to any person not entitled to receive it, or willfully retains the same and fails to deliver it on demand to the officer or employee of the United States entitled to receive it;

Over at Townhall.com, Guy Benson offers another important reminder: Mrs. Clinton has claimed that she didn't realize information sent over her home brew e-mail server was classified because it lacked the proper security markings (emphasis ours).  Yet, we now have HRC on record, telling aides to strip classification markings so material could be sent over a nonsecure fax machine.

In response, a State Department spokesman says its unclear whether the referenced document was ever sent.  But that argument is specious, at best.  Clinton's reply suggests the document was very important and she expected it to be transmitted, even if it meant violating a host of security regulations.  And, given the exchange between Mrs. Clinton and Sullivan (who now works as a top foreign policy adviser for her campaign), there is no doubt the material was highly secret at that moment back in 2011.  "Born classified," as they say in the trade.

Just before this latest revelation, former Washington D.C. U.S. Attorney Joseph diGenova predicted that Mrs. Clinton will be indicted.  As he told Laura Ingraham on her radio show:

"The [FBI] has so much information about criminal conduct by her and her staff that there is no way that they walk away from this,” diGenova said. “They are going to make a recommendation that people be charged and then Loretta Lynch is going to have the decision of a lifetime.

“I believe that the evidence that the FBI is compiling will be so compelling that, unless [Lynch] agrees to the charges, there will be a massive revolt inside the FBI, which she will not be able to survive as an attorney general. It will be like Watergate. It will be unbelievable.”

A Congressional aide involved in the Clinton investigation told The Daily Caller News Foundation that the "sheer volume" of classified e-mails is critical.  As someone who handled the nation's secrets for years, "at some point the law says you are responsible for recognizing classified material when you see it. That gets to the negligence issue,” the source said.


To be fair, an indictment of Mrs. Clinton is hardly assured.  But the scandal is far from over, and it will clearly haunt her on the campaign trail.
***
ADDENDUM:  For those keeping score at home, the number of classified Hillary e-mails now totals more than 1,000.  And if you're wondering about that term "non paper," it's a reference to "anything that is not attributable to the U.S. government, based on what appears on the page."

But wait, there's more: writing in the New York Observer, Dr. John Schindler notes that another Hillary e-mail in the batch seems to contain highly classified information.  The material is found in a message from Clinton confidant Sidney Blumenthal.  As Schindler (a former NSA analyst) observes, the assessment follows the same format and caveats used in SIGINT reporting, raising serious questions as to how Mr. Blumenthal might have acquired such information, which was passed to HRC through her unclassified e-mail system.

No one has made the connection that the date of that e mail is June 17...Watergate day!

Here's a though, have any of the investigators cross-referenced the released e-mails with the classified documents leaked by Bradley Manning to Wikileaks? If they want to live up to their slogan "We open governments" they should be doing their best to live up to it by reposting anything from her office online for all to see.

The Clinton strategy has always been to drag things out as long as possible to exhaust the public's short attention span. The drip, drip, drip theory that the story will be kept alive is clearly not happening in the major media outlets. While knowledgeable people are increasingly outraged by the cumulative findings of Hillary's handling of sensitive information, the majority of the population figures that if there were something big, they would see in the MSM. The better tack might simply be to go after her based on U.S. Code, Title 18, Part I, Chapter 101, Section 2071, Paragraph a. This statue makes it illegal to conceal, remove, or destroy any record of any officer of the United States. The fact that she withheld all of her emails from her tenure as Secretary of State for years is a clear violation of this statue. And all one needs to do is look at the FoIA requests that State was unresponsive to because the records were still with Hillary to prove the impact of her illegal activity. The consequence for violating this statute is that the guilty party is ineligible from holding elected office.