Fresh from their overhaul of the military retirement system, Congress and the Administration have set their sights on how the armed forces promote and retain personnel.

That alone should be cause for alarm.  As we pointed out a few months ago, the new 401K-type system (which will allow participation by all who serve) has a few glaring problems:

"...To receive a full pension, most military retirees would have to wait until age 62--roughly 20 years after many leave the service.  Former service members who want their money sooner could take a lump sum payout when they leave the military (a bad idea for almost any retiree), or take a smaller annuity payout over a longer period, beginning with their retirement from the military.

To "sweeten" the deal, the new system would offer a small "bonus" at the 12-year point, equaling 2-3 months of basic pay for service members.  That would supposedly persuade military personnel to re-enlist and serve another eight years (or longer), ensuring that the armed forces retain experienced leaders and allowing them to keep building adding to their 403b-style nest egg.

But you don't need to be a personnel officer to understand that "bonus" will become separation pay for many service members.  As the military continues to downsize, the 12-year mark is a convenient point to get rid of "excess" personnel, saving the government millions in matching contributions to the retirement plan, along with reduced training costs and all other expenses related to keeping someone in uniform.  For thousands of future E-5s, E-6s and O-3s, their 12-year bonus will come with a pink slip.

From that modest salary, the government will deduct $147.57 for the Sergeant's contribution to the new retirement plan.  Meanwhile, the NCO will be paying more to feed his family, since the compensation commission has recommended eliminating commissary subsidies.  That means military families will pay the same prices for groceries as their civilian counterparts; the SSgt in Colonel Vivian's example will be paying roughly $1,037.50 a month for groceries, leaving him or her with $1,767.07 in spendable income to cover all other expenses.

Meanwhile, there are continuing concerns that the military healthcare system for retirees and dependents (TRICARE) will eventually be phased out, in favor of Obamacare.  If that happens, the E-5 in Colonel Vivian's example will have the added burden of paying monthly premiums and higher deductibles--making it even more difficult to save for retirement.

So, there are plenty of reasons to worry about tinkering with the promotion system.  To be fair, some of the participants who testified before Congress today were saying the right thing.  They suggested the long-standing "up or out" model should be replaced by a system that would let skilled officers and NCOs remain in service longer, even if they're not promoted.

In some situations, that makes eminent sense.  Years ago, I had the opportunity to fly with an RAF AWACS crew out of Aviano, Italy.  The British version had fewer controller consoles (and a smaller crew) that E-3s assigned to the USAF and NATO AWACS fleets, but because experience levels were so high among the RAF crews, there was no drop-off in capabilities.

I remember chatting with the surveillance officer who (at that point) had 25 years of active-duty service.  He had worked his way up through the enlisted ranks, gaining experience in ground-based control radars and NATO AWACS before the RAF acquired their own E-3s.  He would never rise above the rank of Squadron Leader (O-3), but he was quite content--and very good at his job.  As I recall, he planned to keep "flying the line" until he reached the 30-year mark.  It would be extremely difficult for someone in the U.S. military to serve that long as a junior officer--unless they were commissioned at the 20-year point.  Given the selection rates these days for OTS/OCS, the odds of that happening are very slim.

According to Air Force Times, one former official believes that each career group should create its own structure for promotion and advancement.  Under that model, officers in specialties which require high levels of physical skill and fitness (say, infantry or special ops) might be eligible to advance at an earlier age, while those in more "sedentary" career fields, such as logistics, might have a longer promotion window.  There was also more talk about potential breaks in service, giving individuals a chance to participate in a fellowship, or even take a sabbatical.

The danger, of course, is a fragmented promotion and development system that becomes almost unusable.  Perhaps the best advice in today's hearing came from retired Admiral Gary Roughead, the former Chief of Naval Operations.  He noted that sabbaticals and similar opportunities in the corporate world and academia are suitable only in specific circumstances, and do little to reform the personnel system.

Meanwhile, there's a rather large elephant in the hearing room--one that is always avoided at any cost.  The issue is diversity/political correctness and it's impact on today's military.  Consider this "close hold" memo on the desired composition of a recent Air Force promotion board, uncovered by Tony Carr, the retired Air Force Lieutenant Colonel (and former squadron commander) who now runs the essential John Q. Public blog: 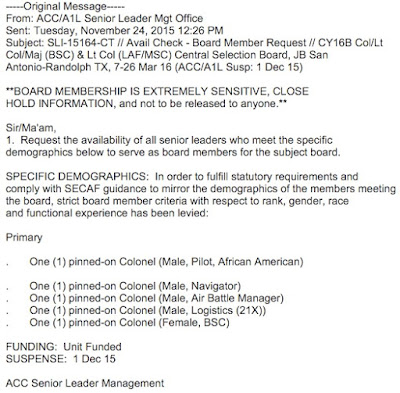 The e-mail, as Carr reminds us, follows "diversity" and "inclusion" directives implemented earlier this year by Air Force Secretary Deborah James.  As many predicted at the time, Secretary James' guidance would inevitably lead to gender and race quotas, ultimately threatening the quality of the force.

And if that's not bad enough, the Air Force Chief of Staff has admitted the service's manning levels are nearing collapse.  During a discussion at the Atlantic Council yesterday, General Mark Welsh said current manning levels are at 82-85% in most mission areas.  Many career field managers consider manning levels below 90% as critical, and some career fields (including crew chief and avionics specialist) are as low as 75-80%.

General Welsh blamed the decreased manning levels on force cutbacks and requirements to create a 35,000-member ISR enterprise during the same period.  But, as Colonel Carr reminds us, Welsh is the same Chief of Staff who approved plans to "jam" the reduction of 19,000 personnel into a single year (2014).  Now, General Welsh (and the rest of the service) must live with the consequences of those decisions, as Tony Carr reminds us.  And there's no relief in sight.

But hey, at least we'll look diverse and inclusive as an over-burdened Air Force nears implosion.