Borrowing a phrase from Jeremiah Wright, it looks like President Obama's foreign policy chickens have come home to roost.

We'll start with the ugliest rooster in the bunch, our debacle in Syria.  As of this writing, the Russian Air Force is two days into a bombing campaign against "terrorist" targets, in support Syrian dictator Bashir al-Assad.  According to satellite imagery, there are more than two dozen Russian warplanes at an airfield in Latakia, near the Mediterranean Coast; the jets began arriving there two weeks ago and initiated combat operations this week: 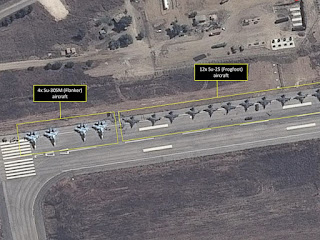 Of course, it's bad enough that Mr. Obama's dawdling--and sheer incompetence--have created a power vacuum that Vladimir Putin was happy to fill.  But the Russian leader added insult to injury by targeting U.S.-supported "moderate" rebels in the first missions flown by his aircraft.  That put the President in a rather embarrassing position; after initially telling Russia's military to stay out of the conflict, Mr. Obama's national security team had to scramble and develop a plan for "de-conflicting" operations between U.S. and Russia aircraft.  At last report, those talks are still on-going, and until some sort of agreement is reached, there is the possibility of an engagement between American fighter jets and their Russian counterparts.

Making matters worse, Russia issued its own ultimatum to Washington just before its air campaign began.  A Russian general delivered the message: American aircraft were to depart Syrian airspace immediately and remain outside the country's borders.  Of course, the U.S. ignored Moscow's directive, but the directive underscored the contempt Mr. Putin has for President Obama and the United States.

Meanwhile, the smart boys and girls at the White House, the Pentagon and the State Department have another Syria-related problem on their hands: what to do about Russian airstrikes against our erstwhile allies on the ground?  According to media reports, discussions are underway about possibly creating a "no-fly zone" over areas occupied by U.S.-supported rebels.

Presumably, that area would be very small, given the wholesale failure of American efforts to vet, train and equip moderates to fight against ISIS.  The Associated Press estimates that about 80 U.S.-trained fighters are currently battling terrorist elements in Syria, after an investment of more than $500 million. And late last month, Reuters reported that one group of American-backed rebels gave a portion of their equipment to the Al Qaida-affiliated Al Nusra Front, in exchange for safe passage.

That disturbing development eliminates another option for protecting the rebels, by equipping them with advanced, shoulder-fired surface-to-air missiles.  Obviously, if our carefully trained and vetted rebels are willing to hand over tons of equipment (including six new pick-up trucks), they'd have no qualms about surrendering MANPAD SAMs to their buddies in Al Qaida, which would use the weapons against U.S. warplanes operating over Syria (and elsewhere).

But the real concerns lie with those Russian jets at Latakia.  ISIS doesn't have an air force, but Moscow's airpower contingent includes at least four SU-30 Flankers which have excellent air-to-air and ground attack capabilities.  Why send the Flankers--roughly equivalent to a U.S. F-15E--if Putin wasn't preparing for all eventualities, including a potential dogfight with coalition aircraft.

And make no mistake: the Russian dictator isn't backing away from that contingency.  If Moscow were truly interested in coordinating the air campaign, they would provide a list of missions, callsigns, targets and IFF "squawks" that could be incorporated into an overall air tasking order, and directed by AWACS.  But Mr. Putin has a different agenda at work in Syria and partnering with the allied coalition is somewhere near the bottom of his priority list.

In fact, the Russians would like to inflict some sort of humiliation on western air assets.  Along with bailing out the Assad regime; protecting Iran's western flank, and extending Russian influence to the Persian Gulf and Red Sea (among other objectives), Mr. Putin wants to drive the U.S. out of the region and sell some military hardware to boot.  If a Russian pilot "accidentally" shot down an American jet-- or one belonging to our partners--the Kremlin won't lose much sleep, figuring correctly that Mr. Obama will never hold them accountable.

That's the price you pay for empty threats, endless vacillation and leading from behind.  Putin, the former KGB Colonel, has rightly sized up his adversary in Washington and finds him weak, feckless and incompetent.  It's an ideal environment for advancing Russia's aims, and Mr. Putin plans to take full advantage of the situation.  Having been largely banished from the key states of the Middle East over the past 30 years, Russia now finds itself as the new king-maker, supporting friends and allies and taking the fight to the terrorists while the U.S. slinks from the regional stage.

It is a positively stunning and frightening turn of events.  What's worse, some in the GOP see nothing wrong with this changing of the guard.  In a recent interview with CNN, Republican front runner Donald Tump seemed quite content to let Putin take on the Syrian problem.  In fairness, he has a point; our current Syria policy is an absolute disaster, and it makes little sense to continue programs that aren't working.

But Mr. Trump is missing the bigger picture.  Someone ought to ask him about the ramifications of a new Russian sphere of influence, extending southward into the Persian Gulf, across Iraq (which has grown closer to Moscow and Tehran in recent weeks) and westward through the Black Sea into the eastern Mediterranean.  With that move, the Russians gain access to even greater energy reserves, allowing them to increase their leverage with western Europe, and at some point, potentially fracture NATO.

Sadly, all of this might have been prevented, by following the recommendations of our generals in Iraq; avoiding encouragement of the Arab Spring, with no regard for the forces behind it and their long-term consequences, and pursuing coherent strategies in places like Libya and Syria.  Instead, Barack Obama has made a total hash of the region; Vladimir Putin is moving in and a man who wants to be the next President sees little wrong with that tectonic shift.

" If Moscow were truly interested in coordinating the air campaign, they would provide a list of missions, callsigns, targets and IFF "squawks" that could be incorporated into an overall air tasking order, and directed by AWACS. But Mr. Putin has a different agenda at work in Syria and partnering with the allied coalition is somewhere near the bottom of his priority list. "

Presumably as the "legal partner" "on the ground" Russia will be expecting NATO to provide that information to them and obey their flight instructions....

"But Mr. Trump is missing the bigger picture."
Yes and no
Its the 26th of January 1945, now is not the time to throw in with Germany.
This battles over, Putins won, time to look to the next battle, a couple of years ago, a competent leader could have ripped Assad out of Russia/Irans nexus and in to ours, bit like Egypt was turned after the Yom Kippur War.
But its too late for that

As always a great post always enjoy your analysis. I'm sorry to be nit picky, but those are SU-34 Fullback's not SU-27's, I missed my calling as a military analyst for the CIA and got stuck working on computers. Please keep up the good work.
Erik

Well, Nate, I beg to differ that Trump misses the "bigger picture". In the biggest picture, our nation's leadership suffers from a corrupt artifact of WW2, the United Nations, fearless promoter of a weaker U.S. military, pansy Rules of Engagement, limited conflicts (no more convincing wins for the U.S.), various sovereignty- draining U.N. agenda, and a fantasy opportunity for an idealistic new world order about which "read my lips" G. H. W. Bush spoke before leaving office.

President Obama has said, "Ideals espoused by the United Nations’ founders 70 years ago: Diplomacy and 'international order' will win over time, while might and force will lose."

Do Americans wish to be regulated on homeland turf by the U.N. or represented by elected leaders with the courage to speak truthfully and the will to act convincingly? Trump knows the real answer to that question while our out-of-touch, sell-out congress represents lobbyists in a most degrading and non-partisan unison.

The public does not differentiate members of congress who had any military service. Other than JAGs (e.g. Lindsey Graham who was actually 'awarded' a Bronze Star) there are but a handful. It is not surprising then that the voters little appreciate that fewer than 40% of our powerful U.S. Senate come are not from a single profession comprising barely 2% of the U.S. workforce (lawyers).

Why is foreign policy a mess? What do post-1776 elected lawyers do best? They talk in ideals and assure their hides are not at risk physically or economically. How very nice for them.

Trump, for one, and Ben Carson, have been fearlessly dismissive of all, unafraid of liberal journalists. But Trump stands alone against the lawyer-lobbyist caucus and their schemes, conspiracies and the frivilous lawsuits he knows will be employed to rip his armor.

I tend to be careful about criticizing Trump's judgement at this early stage of a campaign cycle.

Vigilis--Thanks for the insightful comments, as always. My biggest concern about Trump (and Ben Carson) is their lack of depth (at this point) on national security policy. I fully agree that the American public does not want to be dictated to or regulated by the UN, or elected leaders hewing to the Obama-Clinton-Kerry policy line. But I would hope they could discern--and choose--someone with a coherent global vision, fully cognizant of the world situation, and willing to use American force when necessary to defend our interests.

Make no mistake; Trump is a very smart guy and Ben Carson (as a physician) is brilliant. But their perspective is limited; when one of them doesn't know the Baltic States are NATO members and the other believes Russian domination of much of the Levant is a good thing, they need serious tutoring on the issue of national security policy and world affairs. Not from the GOP-e security establishment, but from independent thinkers like Ralph Peters, (ret) Lt Gen Michael Flynn and others. With the right tutoring, they can craft the type of muscular, decisive foreign policy and military strategy that characterized the Reagan years.