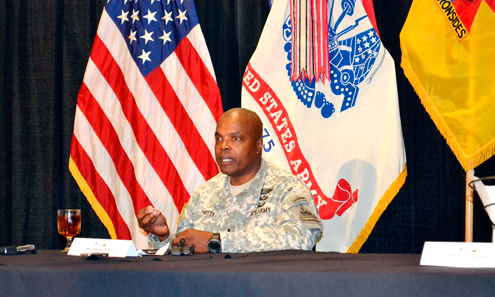 Major General Stephen Twitty, the new commanding general at Fort Bliss, Texas.  Since taking command of the post (and the 1st Armored Division) in August, General Twitty has emphasized security at Fort Bliss, which lies near our porous border with Mexico (photo by Wendy Brown, Fort Bliss Bugle)


In predictable fashion, today's edition of The New York Times does its best to advance the Obama Administration narrative that ISIS isn't at our southern border, and doesn't pose an immediate threat.  From this morning's story which, oddly enough, was buried deep in the paper:

As the Obama administration and the American public have focused their attention on ISIS in recent weeks, conservative groups and leading Republicans have issued stark warnings like those that ISIS and other extremists from Syria are planning to enter the country illegally from Mexico. But the Homeland Security Department, the F.B.I. and lawmakers who represent areas near the border say there is no truth to the warnings.

“There is no credible intelligence to suggest that there is an active plot by ISIL to attempt to cross the southern border,” Homeland Security officials said in a written statement, using an alternative acronym for the group.

“There’s a longstanding history in this country of projecting whatever fears we have onto the border,” said Representative Beto O’Rourke, Democrat of Texas, who represents El Paso and other areas near the border. “In the absence of understanding the border, they insert their fears. Before it was Iran and Al Qaeda. Now it’s ISIS. They just reach the conclusion that invasion is imminent, and it never is.”

But maybe those fears aren't so far-fetched.  In an interview with Fox News, the sheriff of Midland County, Texas said local law enforcement officials have been told to keep a lookout for ISIS terrorists crossing the border from Mexico:

Painter noted that “Muslim” items have been strewn along the border and estimated that 10 to 15 million “undocumented aliens” have crossed the border.

“I think it’d be naive to say that (ISIS is) not here…We have found Muslim clothing, they have found Quran books that are lying on the side of the trail, so we know that there are Muslims that have come across and are being smuggled into the United States,” he said.

Sheriff Painter did not say whether the intelligence report came from federal law enforcement officials or the Texas Department of Public Safety.  But his comments were consistent with those in a recent release from the watchdog group Judicial Watch, which recently claimed that ISIS terrorists are currently operating Juarez, Mexico (directly across the Rio Grande from El Paso) and may be plotting vehicle-borne improvised explosive device (VBIED) attacks against targets on our side of the border.  And just last week, the senior intelligence officer for the Department of Homeland Security affirmed that ISIS operatives have been discussing ways to infiltrate our southern border.

But perhaps the biggest indicator of rising terrorism concerns has been a recently flurry of security activity at Fort Bliss, the sprawling Army base in El Paso.  Major General Stephen Twitty took command of the post and its largest unit (the 1st Armored Division) in August, and has devoted much of his time to improving post security.  While General Twitty said there was no indication of an immediate ISIS threat, he also promised changes in base security procedures:

“If you come here every week, you’re going to see something different, because that’s just the way I am,” Twitty said before 16 media representatives at the Centennial Banquet and Conference Center. “I like mixing it up.”

Twitty said he knew when he started his job that the installation, due to the large expansion beginning in 2006, had outgrown its access control points, and that they needed to be brought into Army and Department of Defense compliance in some areas.

A week after he took command, assessment teams from the Army and the DOD visited Fort Bliss, and members of those teams noted needed improvements, Twitty said.

For example, the installation is out of compliance at Cassidy gate, because there are not prescribed lanes for civilian traffic and for performing searches, Twitty said.

To learn more about the issue, Twitty said he visited all 17 access control points and learned the vulnerabilities at each of them. He has also visited the installation’s housing areas.

After visiting Pentagon officials and talking with them, Twitty said he decided to test certain measures and increase security at Fort Bliss, and although unrelated, that coincided with reports about ISIS in the media.

Some coincidence.  Your humble correspondent spent a fair amount of time at Fort Bliss in 2013, and transited the Cassidy gate (and other entrance points) on multiple occasions.  The issues described by General Twitty existed under his predecessor--and other commanding generals--for years, yet there was no apparent urgency to fix the problem.  And with the billions that have been poured into Bliss since 2006, there was plenty of money to bring the entry points into compliance.

Incidentally, General Twitty previously served at Fort Bliss as deputy commanding general (operations) of the 1st Armored Division from 2010-2012.  In that position, he certainly had the ear of the commanding general and could have pushed for security upgrades.  But the effort didn't begin until Twitty returned to Bliss as the CG.

What changed?  That's rather obvious; nothing energizes the system quite like credible reports of terrorists just across the border in Juarez.  And even if a specific plot hasn't been identified, General Twitty is doing the right thing by assessing security and taking steps to improve access control and make the post more secure.

It's also clear that the new CG is already adopting a heightened anti-terrorism posture. Twitty's vow to "expect the unexpected" and "see something different each week" are standard moves against an emerging terror threat.  Knowing that terrorists typically study a target's security practices before striking, General Twitty is implementing a more random pattern, making it more difficult to identify potential weak spots.

Security at Bliss is a daunting challenge.  In terms of area, the base is the second-largest in the Army (only the adjacent White Sands Missile Range is bigger), and its population has grown rapidly over the past decade, with the addition of 28,000 new soldiers and 37,000 military dependents.  And, with the chaos in Juarez just five miles from portions of the base, the potential threat is real--and very close.