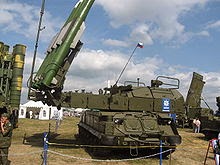 An export version of the SA-11 "Gadfly" surface-to-air missile system.  The SA-11 is believed responsible for today's shootdown of a Malaysia Airlines Boeing 777 in the border region between Russia and Ukraine.  The system is in service with the military forces of both countries (Wikipedia photo)

U.S. intelligence officials tell The Wall Street Journal that the downed Malaysian jetliner was definitely hit by a surface-to-air missile, though they did not say whether it was fired by Ukrainian forces, or pro-Russian separatists.  There are also questions as to why the Boeing 777 was flying over a war zone; U.S. airliners have been barred from flying over the region for several months.  The U.K. Daily Mail suggests the Malaysian jet may have used the Ukraine route to cut flying time and save fuel.

A Malaysian airliner with 295 people has reportedly crashed in eastern Ukraine, near the Russian border.  The Reuters dispatch says that news of the incident was first reported by Russia's Interfax news agency, citing sources in the aviation industry.

Details of the disaster are still sketchy, but Ukrainian officials claim the airliner was shot down by a Russian-made SA-11 surface-to-air missile, according to updated Reuters reporting:

The aircraft, which other sources said was a Boeing 777 flying from Amsterdam to Kuala Lumpur, came down near the city of Donetsk, stronghold of pro-Russian rebels, Anton Gerashchenko said, adding that it was hit by a ground-to-air missile.

There was no further confirmation of the report, although Ukrainian officials said local residents had found wreckage.

Malaysia Airlines said on its Twitter feed it had lost contact with its flight MH-17 from Amsterdam. "The last known position was over Ukrainian airspace," it said.

Gerashchenko was quoted as saying: "A civilian airliner travelling from Amsterdam to Kuala Lumpur has just been shot down by a Buk anti-aircraft system ... 280 passengers and 15 crew have been killed."

Interfax-Ukraine quoted another Ukrainian official as saying the plane disappeared from radar when it was flying at 10,000 metres (33,000 feet), a typical cruising altitude for airliners.

The loss of the 777 raises more questions about Moscow's support for pro-Russian rebels in the region.  Separatists fighting the Ukraine government have been equipped with a wide range of military hardware produced in Russia, but lacking the markings typically seen in Russian Army units.  There have also been reports that some of the "rebels" are actually Russian special forces personnel, who were instrumental in supporting the uprising that led the Crimea region to breakaway from Ukraine and rejoin Russia.

If the use of an SA-11 is confirmed--and it is tied to the rebels--it would confirm that the Russian government is providing sophisticated military hardware to its allies in Ukraine.  The SA-11 (nicknamed "Gadfly" by NATO) is a medium-range surface-to-air missile system that has been in service for more than 30 years.  It is more than capable of intercepting aircraft at low and medium altitude that are transiting through the disputed border region between Russia and Ukraine.

But the SA-11 is also in service with the Ukrainian military, and Russia's ITAR-TASS news agency quickly reported that Kiev deployed a Buk battery in the Donetsk region on Wednesday. Russian officials also claimed that the Malaysian 777 crashed 35 miles from the border, which would (presumably) put it outside the range of any Russian SA-11 battery in that area.  But a Reuters correspondent who arrived at the crash site said it is only 25 miles from the border, within range of SA-11s operated by the Russian military and pro-Moscow separatists.

Kiev has recently accused Moscow of taking a more active role in the conflict, accusing the Russian military of shooting down a Ukrainian SU-25 jet on Thursday--an accusation that Russia denied.  The leader of pro-Russian forces in the region claimed that his group shot down an Ukrainian AN-24 transport before the loss of the 777 was reported.  An AP reporter in the region reported seeing SA-11 equipment in the past 24 hours, not far from where the Malaysian jetliner went down.  But Fox News military analyst Ralph Peters said he "doubted" that Moscow has provided the system to rebel forces, and suggested the missle unit responsible for the shoot down belongs to Russia, and is "perched" along the Ukraine border.

While both sides are casting blame on each other, it should be easy to determine who shot down the Malaysian airliner.  The National Security Agency (NSA) and its partners can detect radar emissions around the globe, and they should be able to pinpoint the location of "Tube Arm" acquistion and "Fire Dome" tracking radars that were active in the area just before the shootdown.

The shootdown will probably be described as an accident, and it wouldn't be the first time a SAM system has destroyed a civilian airliner in the region.  In October 2001, a Ukrainian SA-5 battery shot down a Russian TU-154 over the Black Sea, killing 77 passengers and crew.  The incident occurred during a military exercise.  And barely a month ago, pro-Russian elements downed a Ukrainian IL-76 transport near Luhansk, less than 100 miles from Donetsk.  The June crash was attributed to an "anti-aircraft missile," though it was never specified if rebels used a shoulder-fired SAM, or a more advanced system like the SA-11.

Modern air defense systems--including the Gadfly--are highly automated.  The firing unit, better known as a TELAR (Transporter, Erector, Launcher and Radar) can automatically detect, prioritize and fire missiles against targets within range.  In its "automatic" mode, the only operator input required is to approve the missile launch against targets selected by the fire control computer, or by higher-echelon air defense commanders, operating the TELAR by remote control.  Such capabilities make the SA-11 very dangerous in the hands of marginally trained crews or rebel forces, which can let the system do the work, with little regard for what is being targeted.

Today's crash came barely four months after another Malaysia Airlines 777 disappeared on a flight from Kuala Lumpur to Beijing.  That aircraft has never been found, despite an intensive search that covered territory from the Vietnamese coast to the eastern Indian Ocean.

I cannot believe that any of the parties involved in the crisis would shoot down a civilian airliner. But how would they have known is was civilian? Please don't say "transponder." And it is a war zone.

What this indicates is that everyone is on a hair-trigger, and the potential for all-out war is quite real. The US/EU/NATO should be looking for ways to cool everyone off instead of stirring the pot. Do the US/EU/NATO actually want a war?

I can't help but wonder if the TELAR was on auto and 'somebody' else punched the fire command... Just sayin...

NFO, you had the same thought I did. As you probably know, there are various mobile command-and-control systems that allow interface between various SAM batteries.

Early press accounts indicated that a Russian SA-20 was active in the region at the time of the shootdown; there are at least two C2 systems that allow interface between the SA-20 and the SA-11. Moreover, the on-board radar on the Gadfly (Fire Dome) has a limited target acquisition capability; its FOV is relatively narrow (not surprising in a fire-control radar). To be more effective, it needs targeting information from an acquisition radar, such as the Snow Drift (deployed with SA-11 batteries) or those associated with the SA-12.

With the automated interface between these systems, a Russian SA-12 operator could have easily fed target data to the SA-11 TELAR and issued the fire command, all via datalink. Then you can blame the shootdown on drunken separatists.