The first wave of U.S. cruise missile strikes against Syria are just a matter of time--even if it takes a week (or more) for Congress to grant some form of approval.

According to various sources, American military preparations for an attack are complete; a sixth U.S. warship joined a naval strike group in the eastern Mediterranean during the past 48 hours, increasing the number of missiles that could be launched against Syrian military facilities. President Obama insists he hasn't made a final decision on a strike against Libya, but if that choice is made, the attack could begin in a matter of minutes.

But, since the administration has largely telegraphed its attack plans, some analysts are wondering exactly what might be accomplished by the expected strike. Reuters reports that Syria has been busily repositioning SCUD missiles and launchers in recent days, making them more difficult to target:

President Bashar al-Assad's forces have removed several Scud missiles and dozens of launchers from a base north of Damascus, to protect them from a Western attack, opposition sources said on Thursday.

The move from the position in the foothills of the Qalamoun mountains, one of Syria's most heavily militarised districts, appears part of a precautionary but limited redeployment of armaments in areas of central Syria still held by Assad's forces, diplomats based in the Middle East told Reuters [snip] At the headquarters of the army's 155th Brigade, a missile unit whose base sprawls along the western edge of Syria's main highway running north from the capital to Homs, rebel scouts saw dozens mobile Scud launchers pulling out early on Thursday.

Rebel military sources said spotters saw missiles draped in tarpaulins on the launchers, as well as trailer trucks carrying other rockets and equipment. More than two dozen Scuds – 11-metre (35-foot) long ballistic missiles with ranges of 300km (200 miles) and more – were fired from the base in the Qalamoun area this year, some of which hit even Aleppo in the far north.

The 155th is one of the most important units in the Syrian military, responsible for operations involving SCUDs and other types of ballistic missiles. The brigade commander is the brother of Syrian President Bashir Assad, ensuring that orders from the dictator are carried out promptly, and to the letter.

Some intelligence organizations in the Middle East believe the 155th was responsible for the 21 August chemical weapons attack that killed hundreds of civilians in a Damascus suburb. Given its value to the Syrian regime, it's logical that the 155th and its missile assets would be near (or at) the top of any U.S. target list in Syria, and it's equally certain that Assad will do everythng he can to protect his chemical arsenal and delivery platforms.

And he might just succeed. In the Middle East, Syria is the most accomplished practitioner of denial and deception, skills acquired from Russian experts over the last 50 years. Damascus invests heavily in its deception program, utilizing everything from advanced camouflage netting and decoy equipment, to vast underground complexes and "drive-through" missile shelters.

Over the past decade, Syria has built additional, subterranean missile bases in the central part of that country, complementing the long-established Al Safir complex near the Turkish border. These facilities provide the capability for below-ground storage, maintenance and warhead mating for SCUDs and other ballistic missiles in the Syrian inventory. 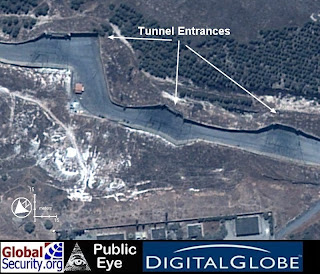 Tunnel entrances at the Al Safir SCUD base in northern Syria. The entrances, which lead to a large underground complex, are flush with the side of a mountain, making it more difficult to target with precision weapons (Public Eye/Digital Globe imagery, posted at GlobalSecurity.org)

At other locations, the Syrians have built dozens of drive-through missile shelters, for both its SCUD force and shorter-range SS-21s. There are far more shelters than launchers and missiles, creating an elaborate "shell game" for potential adversaries. The shelters provide concealment during dispersal operations, after missile launches and during periods when enemy satellites and/or drones might be overhead. Damascus has maintained an effective satellite warning program for more than a decade; Syrian intelligence is very familiar with coverage windows for U.S. satellites, and it's a safe bet that recent movements occurred during gaps in our surveillance.

Similar measures will also be employed for other assets that might be targeted, such as attack helicopters that might have been involved in other chemical attacks. Choppers are easily dispersed and can be moved quickly. Simply shifting helicopters from a base to a nearby soccer field or empty farmland is enough to protect them from attack. Putting them in the sky works even better, since cruise missiles have no capability against airborne targets.  Chemical warheads can also be easily moved, and it's a safe bet that weapons not mated to delivery systems are on the move as well.

To be fair, there are limits to Syria's denial and deception program. Some targets, such as command-and-control facilities, can't be moved; if they are within 30-40 feet of the surface, these bunkers could be destroyed by cruise missiles, though conventionally-armed Tomahawks have a limited capability against hardened, buried targets. A better option would be B-2 stealth bombers, employing penetrating weaponry, but there are no indications (at this point) that President Obama will mount air strikes against Syria.

It's also worth noting that Israel has always had great success against the Syrians, despite their extensive D&D efforts.  One reason for that is the extraordinarily productive human intelligence (HUMINT) campaign that Israel has waged against Damascus for more than 60 years.  Before the 1967 war (which saw Israeli forces take the Golan Heights), the number three official in the Syrian government was a Mossad agent and since that time, Israel's intelligence services have been able to recruit well-placed assets that have provided invaluable information.

Conversely, there are few indications that the CIA has those types of sources in place.  Given that limitation--and the constraints being placed on our planned military action--it might be time to pose a rather obvious question: what happens if we mount a cruise missile strike and don't hit anything?

Spook86, you write a most thoughtful summary and very insightful question at the end.

Allow me to posit that since Putin has both publicly warned Obama and advance positioned ASW ships in the zone in which our missile launchers will operate, he would leave egg on Russsia's face if he failed to interfere with any major attack of any kind.

Putin does not suffer embarrassment any more lightly than Obama. For that fact alone, we may also conclude that the two leaders have already agreed on a limited strike on a token target that will count more for the US press and less for Russian consumption.

Obama may accomplish his objective(s) with a drone strike or two on a Syrian military officer with an impressive rank and little fame, and another strike on an empty Syrian military facility. Putin, having picked the unfortunate sacrifice with Assad's blessing would allow the US to proceed as an indication of how weak and powerless we have become.

Only time will tell.

Well I'm sure you've seen the news. This is what I think should happen now:
Make the Dems introduce the resolution, make every one register a roll call vote. Require all extra funding to come from the existing budget. Require the Administration to explain if this is a declaration of war, if not why not? Make the Administration go on record as to what is exactly their authority to do this without Congressional approval. Make them explain why if it is in their authority to go without Congressional approval that they are here asking for it.
Do not let them hide on this make them explain everything publicly. Congress should remember that Obama is coming to them not by Congressional demand!

Now that I've got my political blathering out of the way, I have to ask, what were they trying to achieve? Your summary alone would tell someone that not only would the stated objective not be met, but any other conceivable goal as well. And I don't militarily alone, but political as well.

Maybe one Syrian officer needs to be forced into an open square where Obama can remotely kill him. Message ser ved.

What were these missile "tests". There seems to be a lot more going on than meets even the sharp eye of the media. Couldn't resist that.

Great post and concur with Vigilis- A showdown with Russia is coming!

" I have to ask, what were they trying to achieve?"

Show that they are really really angry.