Not Ready for the E-Ring 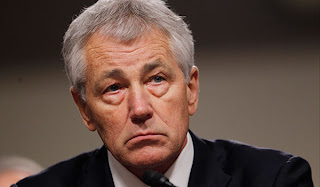 Napoleon famously observed that "every Corporal carries a Marshal's baton in his knapsack."  Historians say the French leader was trying to inspire his men to greater valor on the battlefield, but over the centuries, the quote has become synonymous with over-arching ambition that out-strips actual abilities.

We're not sure if former Senator Chuck Hagel every aspired to flag rank during his days as a grunt in Vietnam, but one think is painfully clear: given a chance to become Secretary of Defense, Mr. Hagel is proving himself completely unqualified for the job.

"...in response to a challenge from Senator Graham to name one person or one “dumb” government policy negatively influenced by Jewish intimidation, Hagel drew a blank. When asked if he stood by an Al Jazeera interview in which he agreed with the characterization of the United States as “the world’s bully,” Hagel split follicles by noting that, “My comment was it’s a relevant and good observation. I don’t think that I said I agree with it.” He answered a question about his vote against designating the Iranian Revolutionary Guard Corps as a terrorist group by claiming it would have been unprecedented to call an arm of “an elected, legitimate government” terrorists, “whether we agree or not.” An hour or so later, White House press secretary Jay Carney dodged a question about whether the president agreed.

Mr. Hagel best summed up his eight hours ordeal when he assured his interlocutors that “if confirmed, I intend to know a lot more than I do.”

To be fair, none of these exchanges offer any real insight on Hagel's views regarding our military forces, how they should be structured going forward, and how they should be employed.  But the former Senator's comments do speak to his world view, which will certainly influence his leadership as Secretary of Defense.

There's also the matter of why Hagel was allowed to make a fool of himself on Capitol Hill.  Prepping a nominee for Congressional grilling is the responsibility of the White House.  Judging by Mr. Hagel's performance, it looks like he was "prepped" by the same bunch that handled the administration's response to Benghazi.

Still, it would be premature to summarize the Hagel hearing as another example of incompetence from the team that has given us record debt, a steadily shrinking workforce, and Middle East policy that would make Nero envious.  But there may be a method to this madness.  The White House hasn't exactly jumped to Mr. Hagel's defense, as it tried to do when Susan Rice's nomination for Secretary of State went down in flames.  In fact, the former Nebraska Senator now seems to be slowly twisting in the wind, usually a cue for the embattled nominee to ask that their name be withdrawn.

If that's the case, it begs a serious question: who's next.  Ms. Rice gave way to Massachusetts Senator John Kerry, who foreign policy views are similar to those of the former UN Secretary, and in some respects are even worse.  Lest we forget, Mr. Kerry was a longtime advocate of engagement with Syrian dictator Bashir Assad, even as that country dissolved into civil war, and the regime began slaughtering its own people.  But Mr. Kerry easily won confirmation, and for better or worse, he will be implementing President Obama's foreign policy for the next four years.

As for who might follow Hagel, that's anyone's guess.  But it's very clear that Mr. Obama is looking for a SecDef who will implement his directives without making waves, or offering a vision of his own.

It doesn't take a military genius to understand that DoD desperately needs someone with ideas, exceptional managerial acumen and a road map for America's military forces in the 21st Century.  To date, President Obama hasn't offered much, other than winding down the wars in Afghanistan and Iraq (which would have occurred regardless of who was in the Oval Office); his strategic focus on the Pacific theater and massive cuts in the defense budget.

The next Secretary of Defense faces huge challenges.  Even without sequestration, the Pentagon is looking at roughly $500 billion in cuts over the next decade, along with cuts in personnel and hardware that will create significant operational obstacles.  Good luck taking on a modernized Chinese military with a force that, on its current trajectory, will be completely hollowed out by the end of Mr. Obama's second term.

And we're being told that Chuck Hagel is the right man to lead the Defense Department at this critical moment.  How rich.  We're not sure if Mr. Hagel ever had a marshal's baton in his knapsack; at this point, we'd just like to know if he actually has a clue.

“We do have a position on containment, and that is we do not favor containment,” Levin said. “I just wanted to clarify the clarify.”
The immortal Yogi Berra had these guys pegged, "We might be lost, but we're making good time!".

Kerry is a traitor... And Hagel is an idiot... It just gets better and better... sigh

Spook, I followed you, but I don't think you made the case for your last, most damning statements. Granted that Hagel seemed unprepared, and side-stepped opportunities to begin raising important, long-term questions. Consider the senators:

As Rosie Gray and Andrew Kaczynski of Buzzfeed noted, at yesterday's hearing on Chuck Hagel Israel was mentioned 166 times, and Iran (a problem closely linked to Israel) 144 times. Afghanistan was mentioned only 20 times, and the problem of suicides of U.S. troops only twice.

And consider the perception of the Guardian reporter: "There were basically three categories of questions asked of Hagel:
• "Is Israel a great country, or is it the greatest? And if it's the former, can you explain your lack of support for America's most important ally?"
• "Why don't you think Iran is crazy, unbalanced and a military competitor of the United States, as I do?"
• "Let me tell you more about the vital national security rule played by the weapons system or military base located in my home state."

Hagel is merely the poster child for an Administration that has decided not to approach foreign policy with consistent,effective creative involvement to support US interests. Why? Isolationism prevents potential distractions from their domestic agenda and their supporting assessment that the US simply doesn't need to lead. It's that simple, personified by Hagel's hearing performance.

But foreign developments will not ignore the US, and kicking the can has consequences:
On Iran's nuclear program, how's that working out?
On Syria how's that working out? With apparently no Russian cooperation ever established and little motivation to intervene, here we are.
And BTW on Russia, where's that reset button again?
And on DPRK, it seems they are content now to iron out their ICBM issues soon enough.
And on AQ, didn't we kill that guy and aren't they now on the run?
So with a brilliant Hagel/Kerry team as backup (assuming Hagel is confirmed). . .Well, it should be interesting.