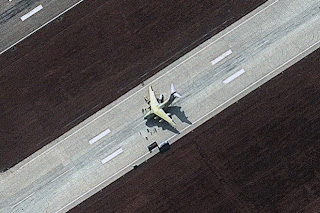 It doesn't take a strategist to understand that China views itself as the superpower of the 21st Century.  With an economy hitting on all cylinders; a rapidly expanding technological base and the money to fund an endless array of military projects, Beijing is accumulating the air, ground, naval and cyber assets considered necessary for global dominance.

In recent years, China has begun sea trials for its first fleet carrier (true, it was acquired from Russia and refurbished, but more are on the way); a fifth-generation fighter is undergoing flight testing, and new ballistic missiles and submarines are entering operational service as well.  Couple that with improvements in ISR and air defense, and it's clear that Beijing is building military forces that can exert influence on the world stage.

But projecting power means getting your forces to the right place--and in a hurry.  And historically, that has been a weakness of the People's Liberation Army and its various elements.  One reason that Beijing has never followed through with an invasion of Taiwan is that it lacks the amphibious capability to ferry enough troops, supplies and reinforcements across the strait.

China's mobility problem is underscored by the relative proximity of Taiwan.  If you can't project sufficient force across a narrow strait, then how can you sustain operations at much greater distances?  Development of a blue-water Navy will remedy this problem to some degree, the PRC still needs strategic airlift, to rapidly deploy military assets across long distances.

But Beijing has a plan for that as well.  According to David Axe at the Danger Room, imagery satellites have recently detected a prototype of China's new Y-20 transport at an airfield associated with aircraft development and testing.  As he writes:


A week after the publication of blurry photographs depicting what appears to be China’s first long-range jet transport, Danger Room has obtained satellite imagery of the new plane at an airfield in central China.
The images, acquired by the GeoEye 1 and IKONOS spacecraft — both belonging to commercial satellite operator GeoEye headquartered in Washington, D.C. — corroborate the general layout of the Xian Aircraft Corporation Y-20, the existence of which has been confirmed by Beijing. They also underscore the emerging consensus among Western experts that the Y-20, while outwardly impressive, could lack the performance of even much older American, Russian and European transports.

The IKONOS image is dated Dec. 25. It shows the Y-20 outside a large hangar at Yanliang airfield, home of the People’s Liberation Army Air Force’s test establishment. The base is crowded with examples of the PLAAF’s other main transports, including Y-8 medium airlifters and, apparently, tanker versions of the aged H-6 bomber — both types of which could in theory be replaced by the Y-20, ostensibly giving China the same global military reach the U.S. and other advanced nations have enjoyed for half a century.

If the Y-20 bears a strange resemblance to the U.S. C-17, it should.  Through espionage, China obtained copies of the C-17's blueprints several years ago, significantly reducing research and development time.  But several western experts tell Mr. Axe that the new Chinese transport is still lacking in a critical area--the advanced, high-bypass turbofan engines needed to power an advanced airlifter.  The engines mounted on the prototype are believed to be older, Russian D-30s.  Without better engine technology, the Y-20 would fall well short of the C-17 in terms of payload and range, and might not even match the performance of older U.S. and European transports.

Still, the Y-20 represents an important step forward for China's military.  The same, vast spy network that acquired plans for the Globemaster III is working overtime on advanced transport engine technology.  Beijing will eventually gain the high-bypass turbofans needed for the Y-20, no matter how long it takes.  So, that technology gap may not be as insurmountable as many believe.

However, it's not quite time to put the PLAAF's airlift division in the same category as Air Mobility Command (AMC), which is responsible for airlift and tanker operations in the USAF.  AMC and its predecessors have been perfecting airlift and in-flight refueling for almost 70 years, developing the doctrine and procedures required for transporting troops, equipment and supplies over long distances.

And that raises other issues worth exploring, as they relate to China's quest for a global airlift capability.  For example, how much progress has the PLAAF made in developing the organizations and equipment needed to load transport aircraft at their departure point and destination?  Does the Chinese Air Force have an equivalent of AMC's Tanker Airlift Control Center, which synchronizes those operations around the world, seven days a week, 365 days a year.

Tanker support represents another weak link in China's air mobility plan.  While the Y-20 can provide a common airframe for a variety of missions, including airborne warning and control; SIGINT collection, airlift and air refueling, introduction of those variants (based on the new design) may be a decade away; until then, the PLAAF will make do with tankers and special mission platform based on older Russian designs, such as the TU-16 and the IL-76.  Currently, China has no more than a handful of those aircraft optimized for tanking and other mobility missions, severely limiting their ability to project power.

Put another way, China's Air Force is many years away from achieving the capabilities AMC has been demonstrating for decades.  Lest we forget, it was airlift and tanker forces that created (and maintained) the "air bridge" that saved Israel in 1973; ferried tons of equipment to the Middle East in 1990 and again in 2001 and 2003, and sustained the "long war" against terrorism with airlift and tanker ops in the Gulf Region and Afghanistan.  And if you want to go back even further, it was airlift that "saved" hundreds of thousands of Germans in 1948, during the Berlin Airlift.

China clearly understands its current deficiencies in strategic air lift and in-flight refueling.  But correcting those problems will require much more than producing significant numbers of Y-20s, equipped with advanced turbofan engines.  Establishing a true, PLAAF equivalent of AMC will take a much broader effort in areas ranging from cargo handling and coordination, to the in-flight refueling of large numbers of aircraft, at extended ranges from Chinese installations.  Put another way, building the aircraft may be the easy part; creating the rest of the air mobility system is the toughest part of the proposition.

Yet, it would be a mistake to underestimate China's ability to create a viable, strategic airlift and air refueling capability.  In November, Gordon Chang of Forbes and National Review noted a visit by a senior Chinese official to Lajes Field in the Azores.  Long an important U.S. military facility, the airbase may be targeted for down-sizing (or even closure) in the next round of Pentagon budget cuts.

Enter China.  Beijing has long been cultivating ties with Portugal (which controls the Azores) and has indicated its interest in establishing a presence if the U.S. leaves.  If that happens, China would immediately have an important outpost in the Atlantic (emphasis ours), and the recent sighting of the Y-20 confirms Beijing's intent to develop the assets required to project and sustain power far from the western Pacific.
Posted by George Smiley at 7:53 PM

They ARE learning power projection, and if they get Lajes, we're screwed...