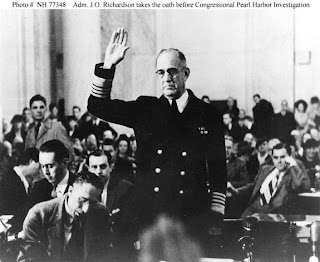 Good discussion. But be careful of Stinnett-he ignores some of the basic, established works on cryptanalytic history (Wohlstetter, for one) in his standard "Roosevelt knew" revisionist tome.

There should be an award for people who are punished for telling the truth. Call it the Richardson Prize. It should be presented in person by whoever authorized the punishment, and come with a mandatory public apology.

I have read other accounts that included this speculation of FDRs sacrificing Pearl Harbor lives to gain acceptance for the US's entry into WW II. It seems possible, given the supporting documentation of Japanese fleet movements and the general consensus at that time that the conflict with Japan would occur. But, where were the US carriers that were saved from the Pearl Harbor attacks and what was the basis for the order for their movement away from Pearl Harbor?

But, where were the US carriers that were saved from the Pearl Harbor attacks and what was the basis for the order for their movement away from Pearl Harbor?

They were covering the reinforcement convoy for Wake Island.

Nobody was under any illusions about war coming--we simply underestimated where the Japanese would strike. The Phillipines was expected. Hawaii was not.

GOP In answer to your question - "But, where were the US carriers that were saved from the Pearl Harbor attacks and what was the basis for the order for their movement away from Pearl Harbor?"

Lexington and Enterprise were the only carriers based out of Pearl at the time of the attack.

They were on a mission delivering aircraft to Wake Island and Midway.

Enterprise was due to be in port on Dec 6th, but was delayed by heavy weather.

I had a barber for many years who was a lookout on the Enterprise from May 1941 until her return stateside for refitting later in the war. He said the devastation at Pearl when they did arrive was heartbreaking.

The Naval Air Staion at Kanoehe was the first target hit - In order to neutralize the carrier planes that were flown off when the carriers were in port. Their absence was a godsend, but the attacke were fierce. This is where John Finn performed his actions which were recognized with a Medal of Honor.

Dusko Popov, the great double agent of WW2 wrote about this in his memoir Spy/Counter Spy.

Excellent post. Could it also be that those above Richardson aimply failed to realize what he, Mitchell and others already did - the potentcy carrier based aircraft could place in the Pacific theatre?

Excellent post. Could it also be that the CNO et. al. simply failed to realize what Richardson, Mitchell and others already did - the potentcy carrier based aircraft could place in the Pacific theatre?

I'm just getting started on M.Stanton Evans' Blacklisted by History, the untold story of Senator Joe McCarthy. The references made there to the International Pacific Institute's role in influencing prewar American policy toward the Far East make a very plausible scenario. After HItler attacked Russia it was very much in Stalin's interest to draw America into the war. The IPR was a front organization run by Owen Lattimore who had close contact with Lauchlin Currie, "...an executive assistant to President Roosevelt in the early 1940's whose portfolio included policy toward China." Not only did Stalin have agents in the U.S. who may have deflected the influence of men like Admiral Richardson, but he also had agents in Japan pushing the Japanese toward attacking America. There is so much to absorb in this book that it is head-spinning. Highly recommended reading- should be mandatory in college courses on American history. As if!

FDR seemed to follow a policy of joining in the war but with the purpose of allowing a Soviet victory. Clearly the worst President ever.

Don't forget the Harry Hopkins statement that on the night before the attack, he discussed the impending attack with FDR and FDR admitted that he knew what was coming.

Remember we intercepted and decoded both the Japanese naval code and the diplomatic code. FDR's December 8th speech to Congress was lies.

We had an opportunity in October to negociate a Japanese withdrawl from SE Asia and most of China. However, that would not due, it would not help get the U.S. into the European war and would ensure a German victory over the Soviets.

FDR was a Soviet first President.

>FDR seemed to follow a policy of >joining in the war but with the >purpose of allowing a Soviet >victory. Clearly the worst >President ever.

While FDR deserves critique for a number of his policies (foreign and domestic), the idea that he was some sort of enabler of Soviet world domination is baseless speculation, if not nonsense.