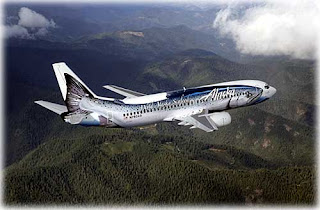 You paid for it. According to DirtySpendingSecrets.com, the federal government gave Alaska Airlines $500,000 to paint one of its Boeing 737s like a salmon. The artwork supposedly depicts the airline's role in transporting fresh seafood to the rest of the country.
When you have a moment, surf on over to DirtySpendingSecrets.com, and prepare to be outraged. The site does a remarkable job of showing how the government wastes your tax dollars. Rooting through the budget and other expenditure records, DirtySpendingSecrets found that federal employees cost the taxpayers $146 million a year by upgrading their official travel from coach to business class--and over half the upgrades weren't authorized.
Want more? How about $500k to Alaska Airlines to paint a Chinook salmon on one of its Boeing 737s (gee, Southwest has one painted like an Orca, and managed to do it on their own dime). But here's the kicker (at least for today). According to the folks at DirtySpendingSecrets, your federal government also allocated $2.6 million to teach Chinese hookers to drink more responsibly on the job.
As the late Everett Dirksen once observed, "a billion here, a billion there, pretty soon it adds up to real money."
***
ADDENDUM: In fairness, we should note that the federally-financed airline paint job was approved during the administration George W. Bush. That affirms the biggest Dirty Spending Secret of Them All: Pork is the only truly bi-partisan issue in Washington.
Posted by Unknown at 3:49 PM

The website you linked to seems to categorize all of these spending faux pas as "liberal", and blame them exclusively on Democrats.

However, the "salmon-thirty-salmon" was famously funded with Dept. of Commerce money, channeled to Alaska Airlines courtesy of the Commerce Committee's then-chair, Sen Ted Stevens (R-AK). At the time, his office was covered wall to wall with framed pictures of Alaska Airlines aircraft and the rugged scenery of his home state. If Ted Stevens is a librul I'll eat my hat.

Come to think of it, though, there's nothing more communist than a state where every citizen gets an annual check for his or her share of the collective's oil revenues!

I guess I'm having fedora for dinner.

SWA has (last I work on the things) 3 of their planes painted up as Shamu. One of the things Ted was good at was scamming the pork for his district. That is about the cost of a fresh fancy paint jib by the way. one of the few smart things American Airlines does is Not paint their planes that much. it weighs a lot (depending on the plane over a ton!), and costs fuel as well as the paint cost.

The humor alone is worth the price: flying fish!