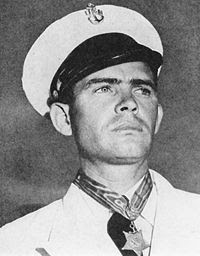 Navy Chief Aviation Ordnanceman John Finn after being awarded the Medal of Honor in 1942. Finn received the nation's highest award for valor for his actions on December 7, 1941, when he manned a machinegun position for more than two hours, defending his base against Japanese attacks (Wikipedia photo).

Sadly, most Americans had never heard of retired Navy Lieutenant John Finn until his death was announced earlier today.

But Finn was a remarkable man who deserves remembrance and recognition on his passing. Not only was he the nation's oldest Medal of Honor recipient at the time of his death, Finn could also be described as the nation's first hero of World War II.

On the morning of December 7, 1941, Finn was a Navy Chief Aviation Ordnanceman, assigned to the Naval Air Station at Kaneohe Bay, on the island of Oahu. Chief Finn and his wife lived in military housing nearby; on that fateful Sunday, he was awakened--and puzzled--by the sound of gunfire.

"They need you down at the squadron," a neighbor told him. Finn jumped into his car and sped toward the air station. When he arrived, Chief Finn found the base under attack by Japanese aircraft. Kaneohe Bay, on the north end of Oahu, was actually bombed before Pearl Harbor; Finn and his men were among the first Americans to enter combat during the Second World War.

As Chief Petty Officer in the ordnance section of a PBY patrol squadron, Finn knew how to operate the machine guns mounted on those lumbering aircraft. Some of the sailors in Finn's department had managed to salvage one of those weapons from a damaged PBY, and the squadron's painter was trying to engage enemy aircraft.

As he later told an interviewer: "I said, 'Alex, let me take that gun'...knew that I had more experience firing a machine gun than a painter."

Finn then found a movable platform used for gunnery training, attached the .50 caliber machine gun, and pushed the platform into an open area, from which he had a clear view of the attacking aircraft. He fired on the Japanese planes for the next two hours, even after being seriously wounded, until the attack had ended. In total, he received 21 distinct wounds, including a bullet through the foot and an injury which caused him to lose feeling in his left arm.

"I got that gun and I started shooting at Jap planes," Finn said. "I was out there shooting the Jap planes and just every so often I was a target for some," he said, "in some cases, I could see [the Japanese pilots'] faces."

After the enemy departed, Finn accepted only rudimentary aid for his wounds, then returned to duty, helping his men prepare for more Japanese attacks. Later, he was ordered to receive additional treatment for his multiple injuries; he would remain in the hospital for more than two weeks.

In September 1942, Finn was formally presented the Medal of Honor by Admiral Chester Nimitz, Commander in Chief of the Pacific Fleet. By that time, Finn had been commissioned as a Navy Ensign and remained on active duty until 1947. He remained in the reserves until 1956, retiring as a Lieutenant.

Like other MOH recipients, Finn was modest about his achievements, saying he was only doing his job. “I read about other guys with the medal who lost their lives or really suffered in wars and I think about myself. I was just an uneducated man who got mad as hell one day,” he said in 1984.

A grateful nation would disagree.
Posted by George Smiley at 10:26 PM

There is a petition online asking the US Navy to name a ship in Finn's honor.
http://www.petitiononline.com/USSLTJWF/petition.html

Would you consider signing and pushing it out to others?

Nickname Jews "occupiers" in their homeland is hypocrisy.
About the British crimes against the Jewish people during World War II we have not forgotten. At the same time the British did not allow Jews to return to their homeland and save their lives from the Nazis, they allowed the Arab masses support the movement members to emigrate to Palestine. They came from Iraq, Syria, Egypt and more. Today they call themselves Palestinians claim that the Jews stole their land. Read the article on the Arab settlement in Israel. http://www.art-gallery-yona.com/demogra-eng.html