The Dragon Lady Lives On 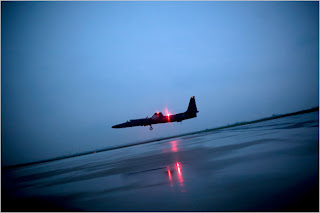 An Air Force U-2, moments before landing at Beale AFB, California (photo by Max Whittaker for The New York Times)

There's an old saying in air combat: speed is life. And the same axiom seems to apply to certain Air Force weapons systems. Fast-movers typically move to the head of the line in terms of funding, while the service tries to rid itself of slower aircraft that don't fit the classic "fighter" definition.

Consider the case of the A-10. The USAF has been trying (for years) to retire the ground support aircraft, affectionately known as the Warthog. More than 20 years ago, the service trotted out something called the A-16, which was (basically) an F-16 with a 30mm gun pod mounted on its centerline pylon. Air Force leaders claimed the A-16 would be more "survivable" than the A-10 against modern air defense systems.

But that theory proved problematic. The gun pod created so much vibration that it was unusable in combat. Additionally, the A-16 could never carry as much ordnance as the A-10 and lacked the Warthog's long loiter time over the battle lines. Meanwhile, the U.S. found itself fighting wars against relatively low-tech adversaries, so the A-10's "survivability" became a moot point.

The Air Force eventually gave up on the A-16/F/A-16 experiment after Operation Desert Storm, while the A-10 has soldiered on into the 21st Century--and why not? It is (arguably) the finest close air support fighter ever produced, with capabilities that other jets simply cannot deliver.

Another aircraft with a new lease on life is the venerable U-2 spy plane. The Pentagon has been trying to retire the "Dragon Lady" for more than five years, planning to replace the high-altitude reconnaissance platform with UAVs, primarily the RQ-4 Global Hawk. But delays in the Global Hawk program--and the demonstrated value of the U-2--have pushed back the Dragon Lady's departure date. As The New York Times reports:

Because of updates in the use of its powerful sensors, it has become the most sought-after spy craft in a very different war in Afghanistan.

As it shifts from hunting for nuclear missiles to detecting roadside bombs, it is outshining even the unmanned drones in gathering a rich array of intelligence used to fight the Taliban.

“It’s like after all the years it’s flown, the U-2 is in its prime again,” said Lt. Col. Jason M. Brown, who commands an intelligence squadron that plans the missions and analyzes much of the data. “It can do things that nothing else can do.”

One of those things, improbably enough, is that even from 13 miles up its sensors can detect small disturbances in the dirt, providing a new way to find makeshift mines that kill many soldiers.

In the weeks leading up to the recent offensive in Marja, military officials said, several of the 32 remaining U-2s found nearly 150 possible mines in roads and helicopter landing areas, enabling the Marines to blow them up before approaching the town.

Marine officers say they relied on photographs from the U-2’s old film cameras, which take panoramic images at such a high resolution they can see insurgent footpaths, while the U-2’s newer digital cameras beamed back frequent updates on 25 spots where the Marines thought they could be vulnerable.

In addition, the U-2’s altitude, once a defense against antiaircraft missiles, enables it to scoop up signals from insurgent phone conversations that mountains would otherwise block.

Lieutenant Colonel Brown also told the Times the U-2's broad-area collection capability often provides "cueing" for Predator and Reaper UAVs, which focus on smaller areas. He said the best intelligence often comes from a mix of UAVs working with the U-2.

Flying the Dragon Lady is a difficult job. Because of their orbit altitude (typically between 60 and 70,000 feet), pilots must wear pressure suits and some suffer from medical side-effects, including decompression sickness. Making their task even more difficult, the U-2's cruising speed is only 10 knots above stall speed, so there's little margin for error.

And, as most aviation buffs know, landing the U-2 is an equally demanding task. The aircraft's large wings obscure the pilot's vision of the runway and create enormous lift, even at low altitudes. To put the plane on the ground, U-2 drivers are "talked down" by another pilot in a chase car. The "chase pilot" calls out altitude so his colleague in the cockpit can completely stall the aircraft at the right moment, allowing the Dragon Lady to settle on the runway.

But the unsung heroes of the U-2 operation are the intelligence specialists who analyze information collected by the recce aircraft. These days, much of the data from the U-2 is downlinked to Beale AFB (where the aircraft are based) and other intelligence centers. Beale is home to the 548th Intelligence Group and its three subordinate squadrons.

The 548th operates a massive collection, processing and dissemination system known as the Distributed Common Ground Station, or DCGS. Technology associated with DCGS allows intel specialists to rapidly analyze, produce and disseminate information for combatant units. CONUS-based analysts are also in radio contact with tactical commanders on the ground, allowing them to deliver critical information instantly, or adjust coverage to meet mission requirements.

Of course, the 548th will live on after the Dragon Lady's retirement. But that date keeps getting pushed back; the Air Force now says the first aircraft will head for the Bone Yard in 2013, but if problems with Global Hawk persist, some U-2s could be flying into the later years of this decade.

Not bad for a spy plane that made its first flight in 1955.
***
ADDENDUM: While the Air Force has been unsuccessful in getting rid of the U-2 and A-10, it has, from time to time, been able to retire aircraft it doesn't like. One example is the Airborne Battlefield Command and Control Center (ABCCC), a modified EC-130E platform that coordinated air support for ground forces.

The USAF tried to eliminate the aircraft for years, but pressure from the Army, Marine Corps and the special ops community kept the plane on active service. ABCCC was finally retired in September 2002, but not without debate. With its impressive communications and battle management capabilities, the platform was tailor-made for conflicts like Afghanistan or Iraq, but never had a chance to serve. Almost a decade later, the Air Force is still searching for a suitable replacement.
Posted by Unknown at 10:02 AM

I recall at least one cycle of trying to divest of the A-10. It was the late '70s and every fighter pilot with an opinion (how many is that?) was declaring that the A-10 must be replaced because it wasn't survivable in a Soviet-style battlefield air defense environment. Here we are, over thirty years later, and the Air Force magazine carrys two articles in its latest issue. One article is by General Loh, and it deals with the disconnect between attrition predictions and actual experience (attrition preditions always being much higher than actual experience). The other deals with upgrading the A-10 with precision weapons.

Excellent comparisons in your interesting write-up.

It seems to me that as drone technology matures the special capabilities of the U-2 could be duplicated, but the Warthog may prove tough to replace in a long war against irregular forces.

About 25 or more years ago the Air Force tried the same game with the A-10. The Army screamed they needed close air support. Even offered to take them on themselves.