Conduct in the Presence of the Enemy 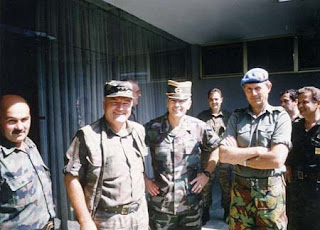 Then-Lieutenant General Wesley Clark poses for the camera in 1994, after holding an unauthorized meeting with the notorious Bosnian Serb war criminal, General Ratko Mladic. Clark is wearing Mladic's hat. A U.S. official likened it to "cavorting with Hermann Goering."

As we've observed on previous occasions, the Democrats will leave no insult unhurled in their effort to tar John McCain.
The latest example happened this morning, on CBS' "Face the Nation." Retired General Wesley Clark, serving as a surrogate for the Obama campaign, told host Bob Schieffer that Senator McCain lacks the leadership experience to serve as Commander-in-Chief.
“He has been a voice on the Senate Armed Services Committee. And he has traveled all over the world. But he hasn't held executive responsibility. That large squadron in the Navy that he commanded — that wasn't a wartime squadron,” Clark said.
And, in the best tradition of Jay Rockefeller and George McGovern, General Clark took full advantage of his TV forum to take a personal shot at McCain--and his war record.
I don’t think getting in a fighter plane and getting shot down is a qualification to become president.”
Funny, but we can't recall Mr. McCain (or his campaign) ever saying that his stint as a POW is a prerequisite for serving as Commander-in-Chief. McCain's years as a naval aviator are merely one example of his years of public service--and the hardships he has endured for his country.
To our knowledge, no one has ever criticized Wesley Clark for getting shot up as a platoon leader in Vietnam, but given his comments about John McCain, perhaps it's time to start. As we recall, Clark trumpeted his own military record during an abortive presidential run in 2004, including his status as a recipient of the Purple Heart. But no one ever suggested that his combat service (and wounds) made his less qualified to serve as president.
No one doubts that Clark performed admirably in Vietnam, and suffered for his country. But, it's worth noting that the young infantry officer had the benefit of a medevac and the finest U.S. medical care after his injuries on the battlefield. John McCain didn't see an American doctor for almost six years following his ejection and capture in North Vietnam. During that time, he received "medical treatment" that was crude, at best, and almost died from his wounds.
We also recall that Mr. McCain conducted himself with honor under those extraordinarily trying conditions. Offered repatriation when his captors discovered that he was the son of a Navy admiral, McCain declined, demanding that all prisoners captured before him also be released. He also resisted enemy propaganda efforts, though he signed one "confession" of war crimes after months of beatings and other forms of physical abuse.
McCain's resistance continued until he was finally released in 1973. As recounted in Robert Timberg's superb book, The Nightingale's Song, the North Vietnamese made one final effort at scoring propaganda points from John McCain. Shortly before his repatriation, an enemy camera crew asked McCain if he wanted to "thank" a North Vietnamese doctor who purportedly treated him in the Hanoi Hilton.
"Tell the son-of-a-bitch I said hello," McCain retorted, "because I haven't seen him in five-and-a-half years."
Contrast John McCain's conduct to that of Wesley Clark. During the 1990s, Clark and other Clinton Administration envoys envoys met with notorious Serbian leaders, including General Ratko Mladic, leader of the Bosnia Serb Army, and a wanted war criminal. By various accounts, Mladic was responsible for the deaths of thousands of Muslims and Croat civilians.
During one highly-publicized meeting Mladic and Clark, all smiles, gladly exchanged hats, and posed for photographers. It was a particularly shameful moment, one that General Clark never mentions. Making matters worse (if that's possible), the infamous "hat-swap" meeting, which occurred in 1994, was not officially authorized. "It's like cavorting with Hermann Goering" one U.S. official complained at the time.
To our knowledge, General Clark has never apologized for that meeting--or his feckless conduct. And, quite predictably, Clark's friends in the MSM have never called him on it.
As for Clark's critique of Senator McCain, it's downright laughable. Too bad Bob Schieffer didn't ask him why Barack Obama's years as a "community organizer" and Illinois State Senator made him more qualified than John McCain to lead our nation's military. Seems that Clark's candidate is the one lacking executive experience.
But, it's about what you'd expect from General Clark--and his friends in the Democratic Party. They are determined to "Swift Boat" John McCain at any cost, using any convenient surrogate.
Still, there are a couple of problems with that approach. First, the "Swift-Boating" of John Kerry was based in truth, thanks to the candidate's own distortions and exaggerations of his Vietnam record. An exhaustive examination of McCain's military service has not revealed similar discrepancies.
Secondly, the Swift Boat veterans who questioned John Kerry had credibility--they served alongside him, in the same small boat unit. General Clark has no combat experience as a fighter pilot, and lost much of his credibility a long time ago.
About the same time he posed in that infamous photo, wearing Ratko Mladic's hat.
Say what you will about his "executive experience." At least John McCain knows how to handle himself in the presence of the enemy.
Posted by Unknown at 3:21 PM

Weasley Clark has a short memory.

"I live by a simple rule. If you wore the uniform, if you served your nation with honor, and especially if you fought and were wounded in battle, then you have earned the right to be treated with respect."

"That's why I am so outraged that the Republican party has systematically attacked the wartime service and patriotism of veterans who are running for office as Democrats. It is despicable -- the sign of a party more concerned about hanging onto power by any means possible than with giving veterans the respect they have earned."

How fast Democrats are to condemn Veterans, after claiming they deserve better.

I wonder how much "experience" Clark thinks Obama has. (That would be good for a chuckle I'm sure.)

The whole Bosnia conflict is a comedy of errors. Contrary to what some pundits have said, lives were lost. Half the time General Clark went against what his component commanders were suggesting.

He is one Army General that I was very glad to see retire, and surprised as heck when he showed up on the National political scene as a Presidential candidate. Whiskey Tango Foxtrot?

Nothing has changed, he has only become worse.

While I refuse to defend Wesley Clark, you should give a little more context to this whole scenario. Clark is first and foremost an unemployed democrat. He has been trying to get hired, elected or nominated to a national position since he retired from the Army. Until 2 weeks ago he was a staunch supporter of Hillary Clinton, now that she is out of the picture, he has had to change horses mid-race (a maneuver he apparently thinks will be easier to accomplish under fire).

Obviously, I have no insight into how he became a spokesperson for Obama. Since he has a history of 'self-appointment' that may be at play here, or perhaps the Obama campaign did recruit him (they have Tony McPeak on staff, so anything is possible). Regardless, Obama has since denounced Clark's statements (kind of) and I would imagine he is looking for some other stars to hitch his wagon to.

Obama, without mentioning Clark by name, said that patriotism "must, if it is to mean anything, involve the willingness to sacrifice."

"For those like John McCain who have endured physical torment in service to our country — no further proof of such sacrifice is necessary," Obama said. "And let me also add that no one should ever devalue that service, especially for the sake of a political campaign, and that goes for supporters on both sides."